Markets have just digested the news of progress in U.S.-China trade negotiations, as a new wave of tariff escalation sent the markets down. The S&P 500 lost 1.8% on Tuesday, while the FTSE 100 and Euro 50 collapsed more than 3.2% last day after the US Presidential Administration announced new tariffs to some European goods. This step imposes tariffs on Airbus, as well as other goods, including whiskey and cheese, the production of which is subsidized by the state. This step triggers fears of a new round of escalation of tariff wars, raising concerns about a possible European response. 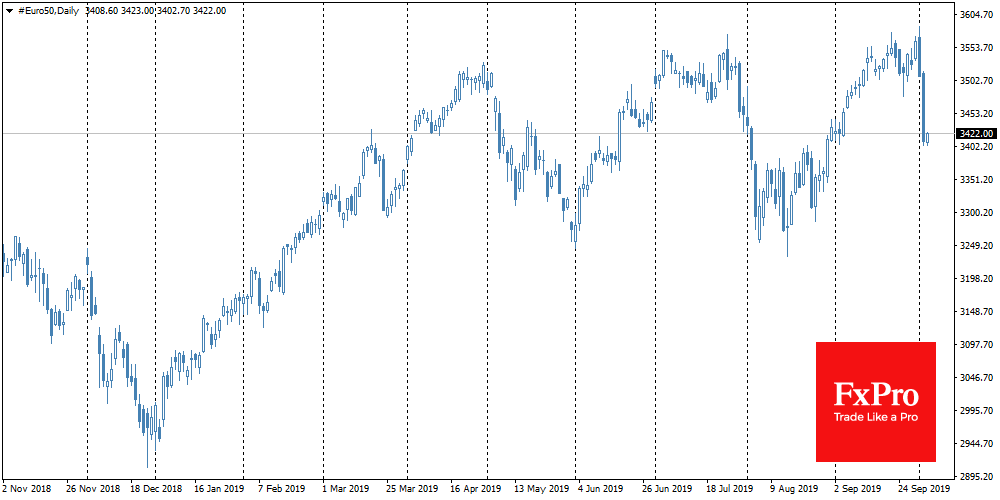 The tariff announcement proved to be very untimely news for the markets that had previously been under pressure from weak economic data from the US and Europe. The introduction of tariffs and fears of tit-for-tat steps could further suppress business sentiment, which is already at the lowest levels for years.

As the FxPro Analyst Team said, the new statistics are increasing pressure on the Fed and ECB to continue its easing, as it indicates weakness in the areas to which these central banks pay the most attention. Eurozone inflation fell to 0.9% YoY, about half the ECB target levels, and weakness of business sentiment indices in Germany suggests that this decline may continue in the foreseeable future. It is also worth noting the return of oil to $57 for Brent, the 3-month lows area, which can curb producer prices in the coming months.

It is impossible to pass by the weakening of the Chinese yuan, which increases global deflationary pressures together with declining energy prices. The U.S. Federal Reserve is paying much more attention to business than to inflationary signals (which are heavily distorted by tariffs) and in this area, the Fed is facing a series of worrying news this week. In addition to the decline of the ISM index in the real sector, it is also worth noting the apparent slowdown in employment growth in September, as reported by ADP the previous day. A recent report closely correlating with the official statistics published yesterday noted a 135K increase in employment last month, shows the weakness persist after the drop in May.

Today’s data may further shed some light on the dynamics of inflation in Europe and business activity in the U.S. In the afternoon, the prices of eurozone producers will be released, which are expected to show year-to-year decline for the first time since 2016. At the beginning of the U.S. session, investors will be watching for weekly unemployment claims, and Non-Manufacturing ISM later. The latest represent about 80% of the U.S. economy, so a significant deviation from previous results and expectations could have a major impact on the markets, reinforcing or, conversely, unfolding the current negative sentiment.