Over the past week, the benchmark cryptocurrency increased by more than 15%. At the moment, BTC is trading around $9250, confidently stepping over the threshold $9000. Thus, the coin continues to follow the technical analysts’ forecasts, reinforcing the demand of market participants and not allowing corrections to cause bearish sentiment. The next most important resistance level is expected at $10000.

Price dynamics near this level promises to attract particularly close attention. On the one hand, it is precisely this level that can provoke really strong profit-taking activity. If the growth momentum dries right after touching $10,000, we can see a massive correction, as many will rush to “exit”. 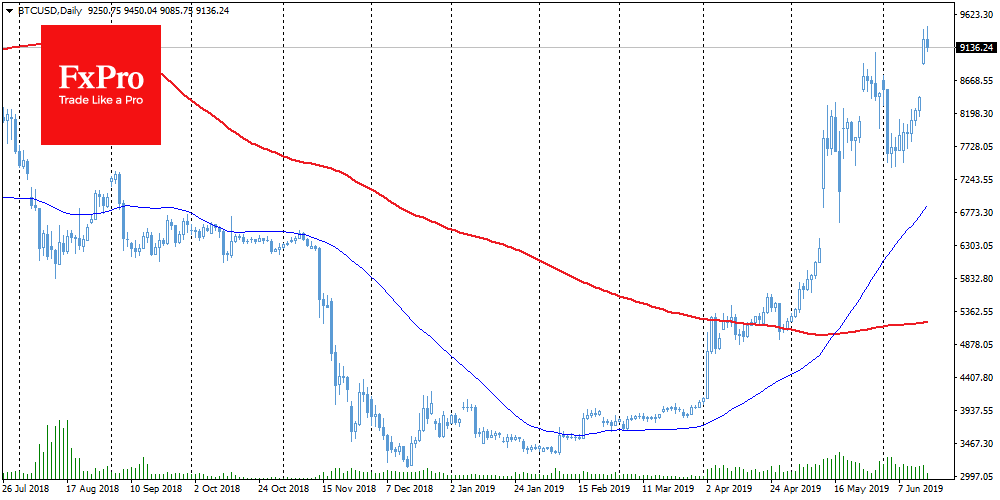 On another hand, so far more likely scenario in light of the ongoing rally is that Bitcoin will continue to blaze through resistance levels one by one. Fear of lost profits and desire to join the new crypto rally can further move the prices up.

Anyway, the market reaction around $10,000 can be indicative, laying the foundations for the trend for the following days and even weeks.

Rumours about Facebook and the Telegram cryptocurrencies have long been in the focus of the crypto market participants. Pavel Durov does not yet make it clear what exactly is happening with the most desired product of the messenger, while a Facebook subsidiary launched a digital wallet Calibra with a cryptocurrency called Libra. The digital wallet will receive support from major brands, including MasterCard, Visa, PayPal, and many other major heavyweights. Thus, a wide range of sellers will be able to get paid via this cryptocurrency. It became known that Calibra has already published Whitepaper, and also launched Test Net. The launch for clients is planned in the first half of 2020. Libra cryptocurrency will be built into WhatsApp and Facebook Messenger.

It is simply impossible to underestimate such an event, but you should also think about what will happen to the “first” cryptocurrencies. Now the whole market is on the rise: along with BTC, altcoins are also growing. However, it must be admitted: this growth is almost completely speculative. No one wants to spend Bitcoin (BTC) or Zcash (ZEC) on daily expenses, because tomorrow their price may add 10% or more. The same fate awaits Libra or TON if their prices will float freely, and, therefore, the only way to get a massive adoption of digital currency is to make it stable. On the one hand, this will nullify the speculative demand, on the other hand, Facebook’s huge user base will provide Libra with tremendous liquidity and trade volume.