Coronacrisis as an impulse for faster monetary system digitalization

Bitcoin has been going through a consolidation process at around $5K over the last six days. After a short two-way deviation, the cryptocurrency returns to the current price level. Over the previous 24 hours, bitcoin climbed by a per cent and changed hands at $5,300. According to CoinMarketCap, since March 17, daily trading volumes have been stable at around $40bn. The Bitcoin Dominance Index is at 64.2%, having lost about a percentage point over the week. Like bitcoin, altcoins have fallen just as much, so they can also attract investor demand.

Technical indicators, including Crypto Fear & Greed Index and RSI, show that the first cryptocurrency is still in the deep oversold territory. At the moment, the most acute problem is the growth in the number of infected. It seems that investors can stay away from active purchases until this indicator begins to show a steady decline. 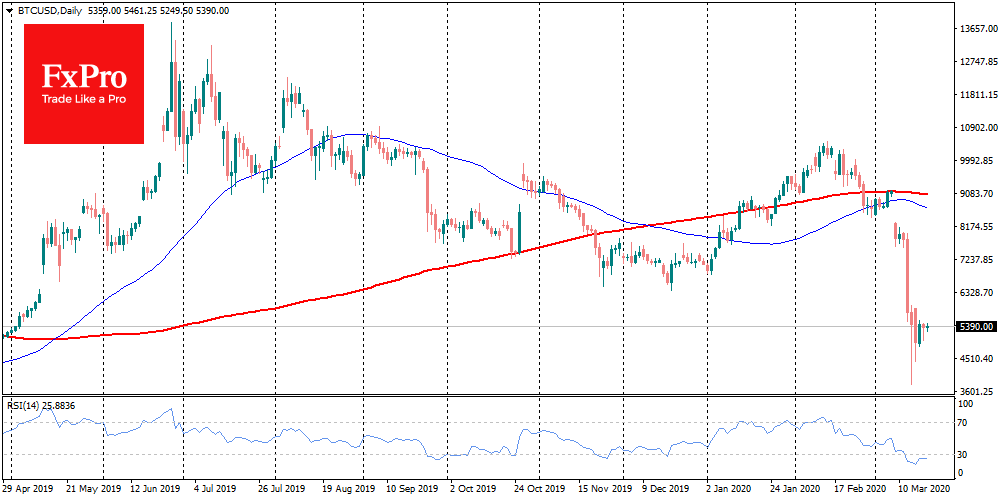 The spread of the virus, closed borders, destruction of supply chains, falling demand for commodities, rising unemployment and a crushing blow to small businesses are what awaits us. The consequences may turn out to be what they were after the wars, while the tools of central banks are rapidly reducing. The longer countries are isolated, the more global the consequences will be.

Apart from the purely negative consequences, we can also observe quite exciting processes, like faster digitalization of our life. Remote work has long been gaining popularity around the world. Now it is a necessity. The Internet had a long time ago made it possible to work from home in many sectors of the economy. There is a growing expectation that against the backdrop of the coronavirus epidemic, many employers will finally choose this employment model. Remote work, online education, online medical consultations, even robot management in factories, ordering products at home – the economy is becoming more and more digital. Digital currencies in it look like a natural evolutionary stage.

Recently, we are continually witnessing comparisons with the Great Depression. Indeed, a lot of things are similar except for technology. The authorities of all countries of the world should take the next step and create, for example, their digital national currencies with limited emission and much greater transparency.

The Fed should understand that cryptocurrencies are already playing in its field with competitive advantages that will become increasingly evident as the new crisis grows.