Bitcoin about 1% sank over the last 24 hours and trades around $10,250 with a downward slope, risking to test once again the strength of the level of $10K. The dominance index of the benchmark cryptocurrency declined to 69.1%, as Ethereum suddenly revived. This decline may be just small correction due to inactivity around the leading cryptocurrency. But it can inspire buyers of the injured Ether in the short term.

The price of Bitcoin has declined, but the hash rate in the network reached another historical maximum of 85 EH/s. Such a significant jump in mining difficulty in the last three months occurred due to the launch of about 600,000 new ASICs. Manufacturers of mining equipment are back to profit, although they were preparing for this by launching new chips even in the darkest times of the bearish market. At the moment, miners mostly prefer not to sell the mined bitcoins, in anticipation of selling at a higher price. Such a significant growth of hash rate may indicate the prospects of Bitcoin growth, being one of the few physically measurable indicators of the crypto market. 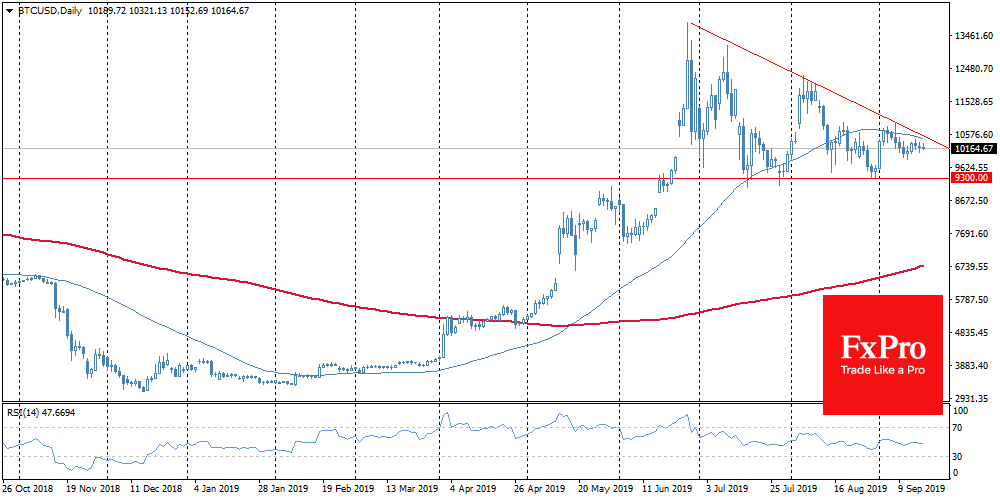 The number two among cryptocurrencies – Ethereum (ETH) – climbed more than 2% overnight close to the round level $200. The coin got support on the decline to the 200-day average and then turned upwards. Possibly, the sentiments around the altcoins gradually began to improve. On the one hand, the market participants began to feel tired from the side trend of Bitcoin. On the other hand, the altcoin market lows and “funeral speeches” of many media indicate the opposite situation, where investors are forced to get rid of their assets with huge losses. As often happens in markets, the growth begins just right after that. 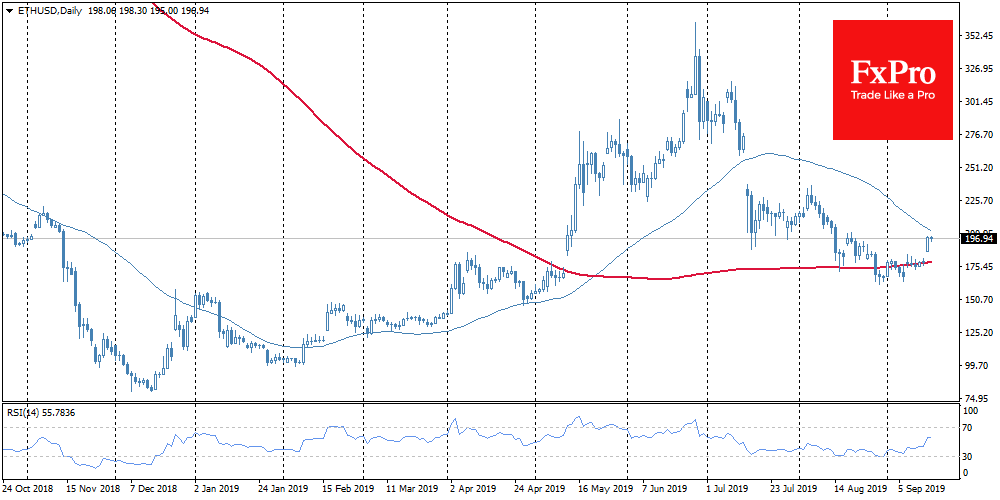 The drone attack on Saudi Arabia’s oil production capacity did not pull the demand for Bitcoin as a protective asset. Eventually, it becomes another proof that the cryptocurrencies are still difficult to classify as safe havens, where investors rush in turbulent times.

Politicians grilled cryptocurrency Libra for the second time – now the representatives of 26 central banks of the world gathered for a serious conversation. ECB’s Benoit Coeuré immediately made clear that the “bar of approval” will be extremely high. Central banks are seriously concerned that the Facebook cryptocurrency, supported by dozens of major global corporations, will significantly reduce the role of Swift and IBAN in international transactions. They afraid new stable crypto becomes a superstructure over national currencies. This may be the beginning of the end of the monetary power of governments.

Senior officials are afraid of significant competition. David Markus, CEO of Calibra, is trying to reduce the degree of concern, saying that the regulators will adequately supervise the project, but it is unlikely to convince them. Everybody understands that progress can’t stop, and in this case, the traditional banking sector is late with the development of its technologies. So it is in their interest to delay the launch of the competitor as much as possible.