Home › Market Overview › When the worse is better: markets grew on stimulus hopes from CB’s

When the worse is better: markets grew on stimulus hopes from CB’s

Market focus The attention of financial markets is still focused on US trade disputes with other countries. Thursday was the second day of negotiations on trade and migration between the representatives of the U.S. and Mexico. During the day, there were reports that the US administration may postpone the date for the introduction of tariffs, which is now scheduled on Monday. Reports of a softening position supported the risk-on mood on the markets, reinforcing the purchase of stocks. However, on Friday morning, markets are taking a more cautious position in anticipation of the U.S. employment report.

Stocks US stocks rose 1% on Thursday. SPX rose 3.9% this week after touching 2.5-month lows. Today is NFP- day, and trading activity can be reduced until the release of the U.S. statistics. The further rebound from the current 2850 may lead SPX to an important MA (50) level at that is at 2870 now. At the same time, it is worth noting that the markets have been growing in recent days in anticipation of stimulus from central banks, so the worse the data is, the higher the hopes for a softening of policies that support stocks. 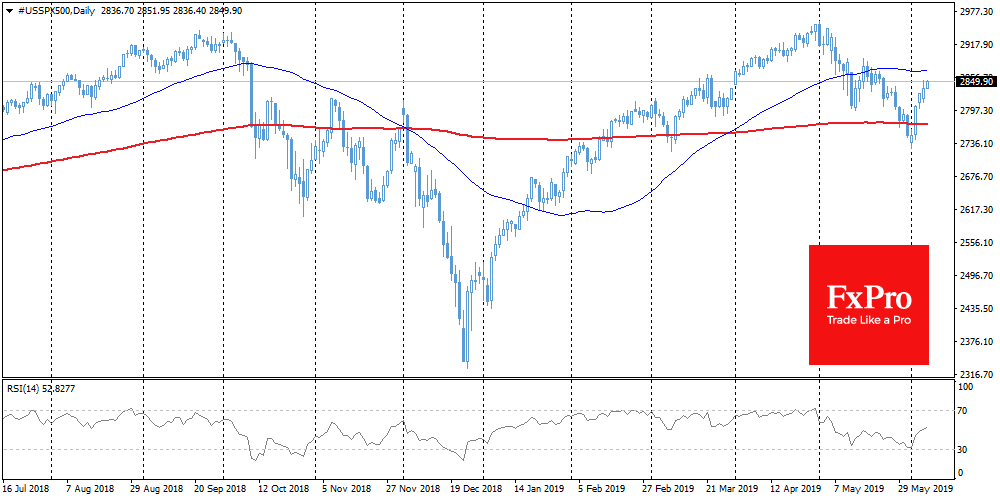 EURUSD The European Central Bank on Thursday moved the date before which it promises not to raise interest rates, but at the same time, it did not make hints about softening the policy in the near future. According to money market futures, the likelihood of interest rates cut by 10 bp this year fell from 75% before Draghi’s speech to 45% at the moment. The change in expectations provoked a surge in EURUSD to 1.1300. Like earlier this week, the growth of the single currency was stopped as it approached this mark. The single currency has been falling since yesterday evening to 1.1260. Nevertheless, EURUSD remains above the former of the resistance line of the downward channel, reflecting the possible likely reversal of the euro trend from a decline to growth. 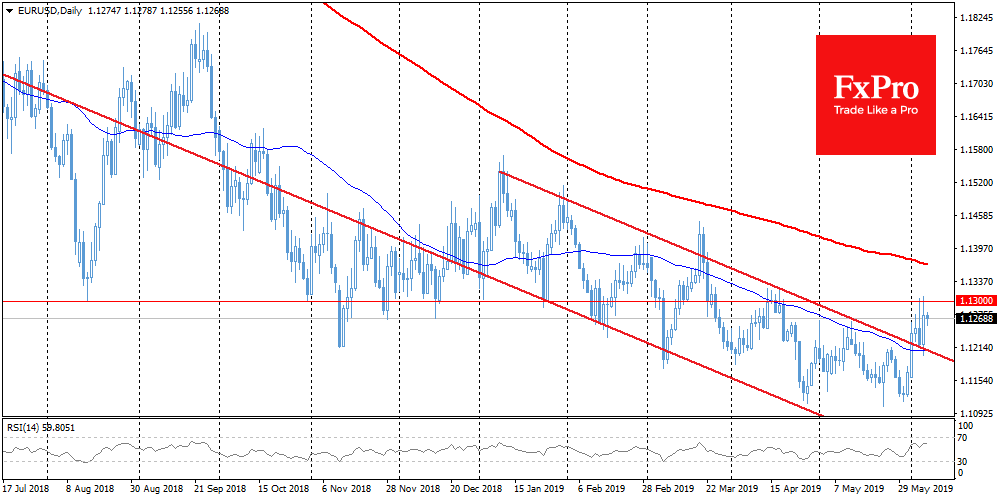 Gold Gold unsuccessfully tried to hit $1340 on Wednesday and Thursday, which eventually turned into increased selling pressure. The end-of-week factor plays its role, as after strong dynamics market participants are trying to take profits. This is especially relevant now, before the release of important data on the US labour market. Chart of the day: NFP U.S. Non-Farm Payrolls (scheduled to 12:30 GMT) often have the strongest influence on the markets, deviating markedly from expectations. Market analysts at the beginning of the week, on average, predicted an increase in employment by 180K in May. However, the sharply negative ADP report on employment in the private sector (an increase of 27K against the expected 185K) caused the alertness of market participants. Other labour market indicators are causing much less concern. Weekly unemployment claims changed slightly over the month. Manufacturing ISM Employment Index added 1.3 points to 53.7. Non-manufacturing ISM Employment Index added 4.4 points to 58.1. Such a sharp increase can be a reflection of both a strong number of employed people and the growth in wages.