At the start of trading on Monday, the British pound fell 0.6%, as a crucial Saturday vote on the new Brexit plan was postponed. Prime Minister Boris Johnson, as required by law, wrote a letter asking the EU to consider the possibility of rescheduling the deadline for leaving the EU again.

The “Meaningful vote” for the Deal is scheduled for Monday. If Johnson manages to push his agenda, the country will get a chance to leave the EU on November 1 potentially. Observers note that a slight advantage is still on the side of the prime minister, and the markets positively perceive the current version of the Deal as the least economically painful. However, there is still some uncertainty: Speaker of the House of Representatives John Bercow may refuse to vote today. Then, according to political observers, the most probable scenario is to vote “in principle” for or against the Brexit deal. 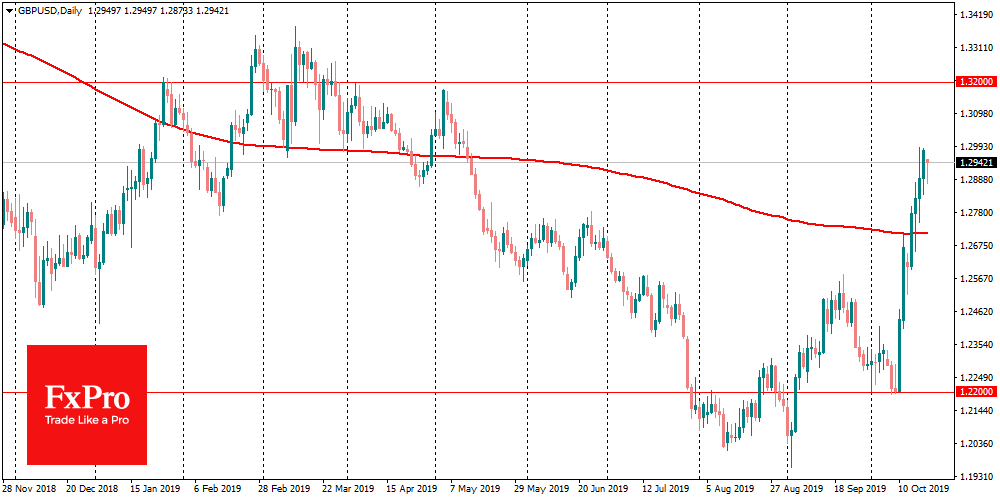 As the FxPro Analyst Team said, the markets still faces complete uncertainty around Brexit: all options are on the table, from a second referendum to the abandonment of Brexit. All this shifts the possible surge in volatility to a later date – the evening of Monday or Tuesday, after British lawmakers nevertheless speak out about the Deal.

If in the next two days Johnson manages to get Parliament to speak out and approve, the pound may well get some support. However, sterling has already done an impressive rally, which reduces the potential for further strengthening at this point to the 1.32 area, this year highs.

If the Parliament successfully sabotages the initiatives of the prime minister further, the pound may turn to decline on strengthening the chances of a new general election and a second referendum. The entire cycle of negotiations and approvals may begin anew, which is potentially able to return the British currency near 1.22, where it started the rally 11 days ago.