These Are the Cities With the Most Ultra-Rich People 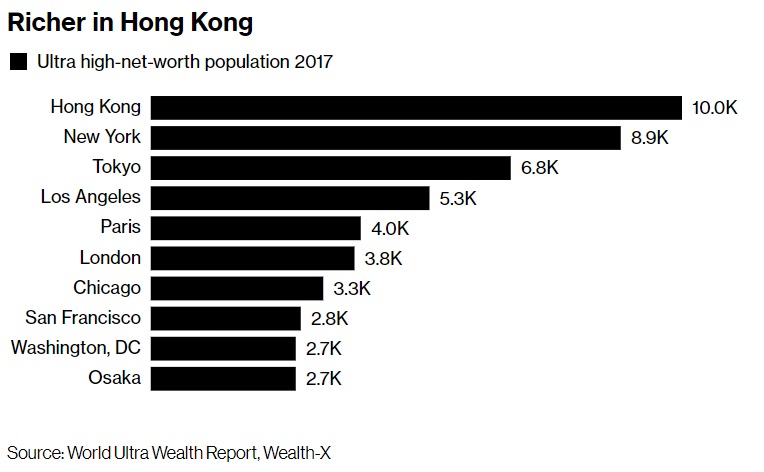 New York has lost its crown as home to the most ultra-rich people, beaten out by the rising tide of extreme wealth in Asia. Hong Kong surpassed the Big Apple as the city with the highest population of people worth at least $30 million, according to a new report. The former British colony saw its number of ultra-wealthy increase 31 percent last year, to about 10,000, research firm Wealth-X found, higher than the nearly 9,000-strong population of the U.S.’s largest city. Tokyo came third, while Paris beat out London to take the European crown as Brexit weighed down the U.K. capital.

The number of ultra-rich worldwide rose 13 percent last year, according to Wealth-X, totaling about 256,000 people with combined assets of $31.5 trillion. Asia saw the fastest growth, driven by mainland China and Hong Kong, the study’s authors wrote. Reflecting the region’s rise, its share of the global population of people with at least $30 million rose to just over one-fourth, up from around 18 percent a decade ago.

While Hong Kong topped the city rankings, nowhere in mainland China made the top 10, despite the country being third in the list of nations. That’s because China’s wealthy are widely dispersed, illustrated by the fact it was home to 26 of the 30 fastest-growing cities for the ultra-rich.

These Are the Cities With the Most Ultra-Rich People, Bloomberg, Sep 06
Article Rating
Rate this post
Related Articles