Home › Market Overview › The ‘Bitcoin Rich List’ Has Grown 30% in the Last Year, But Why?

The ‘Bitcoin Rich List’ Has Grown 30% in the Last Year, But Why? 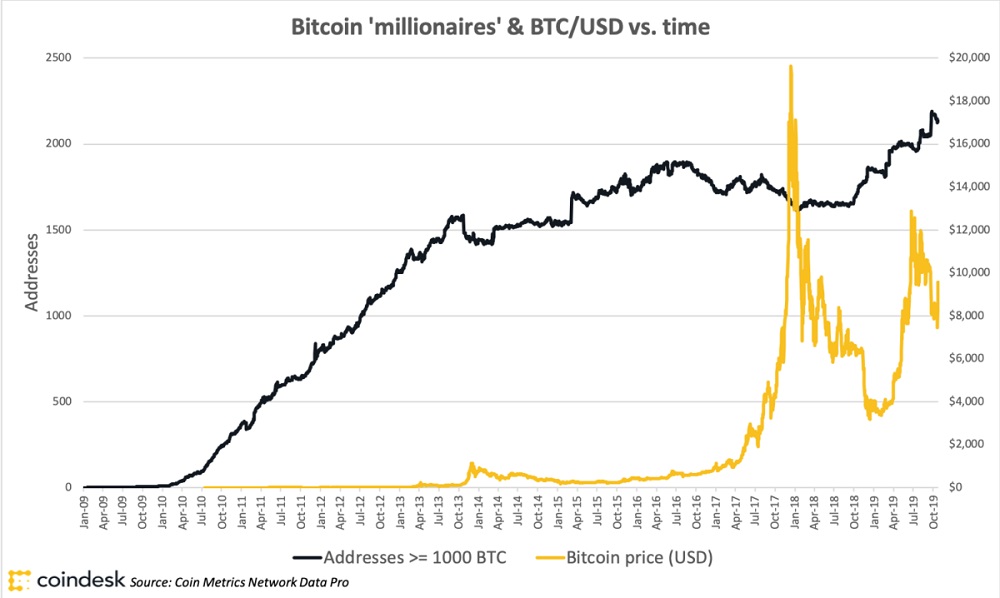 The Bitcoin Rich List, or the number of addresses holding more than 1,000 BTC, has grown in the past 12 months, possibly reflecting an influx of high-net-worth investors.   The metric has registered growth of 30 percent since September 2018, according to Coin Metrics data. Even when adjusted to exclude addresses known to belong to exchanges, the figure shows a similar surge.

At press time, 2,148 addresses contain more than 1,000 bitcoins, amounting to just 0.01 percent of all bitcoin addresses, as per BitInfoCharts’ Bitcoin Rich List. As seen in the fever line chart above, the list has witnessed a near 90-degree rise over the last 12 months. Investor and analyst Willy Woo believes the list has expanded mainly due to increased investor participation in the market:  “The two options are we have high-net-worth investors coming in or it could be cold storage practice at the exchanges and custody solutions. The latter explanation cannot be ruled out, but it does not coincide with other data we have on the timing of when supply increased at these entities. For now, I’m going with the first explanation.”

Note that BTC fell from $6,400 to $3,100 in the final quarter of 2018 and experienced investors may have taken advantage of the price dip to snap up the top cryptocurrency on the cheap, leading to the rise in the addresses with more than 1,000 bitcoins.  Other observers, however, are not convinced that the number of individuals with 1,000+ BTCs has increased. After all, an individual can move 50,000 bitcoins from a single wallet to 50 different wallets for custody purposes. Also, a cryptocurrency exchange like Binance holds bitcoins belonging to millions of users and can store coins in different wallets. “It’s mostly the exchanges … both the amount of BTC held in exchanges and the number of exchanges/custodians have been growing,” trader Alex Kruger told CoinDesk.

The ‘Bitcoin Rich List’ Has Grown 30% in the Last Year, But Why?, CoinDesk, Nov 5
Article Rating
Rate this post
Related Articles