Home › Market Overview › Tariff deferral in the U.S. is a spoonful of honey in a barrel of tar

Tariff deferral in the U.S. is a spoonful of honey in a barrel of tar

Washington has brought the markets back to growth Trump moved the deadline for the introduction of 10% of tariffs on some Chinese goods from September 1 to December 15. The decision was made in an effort to support demand for consumer goods – from mobile phones to clothing – during the New Year holiday season. This news provoked a strong positive reaction from the markets, allowing the U.S. indices to recover from the downturn at the beginning of the week. China’s HangSeng and ChinaA50 turned to growth, moving away from multi-month lows. The psychological effect is also important for the markets. Many times, we have seen how a sharp escalation of trade disputes is replaced with some relief. However, the general trend is still in the direction of tightening, although the mood is still far from panic. 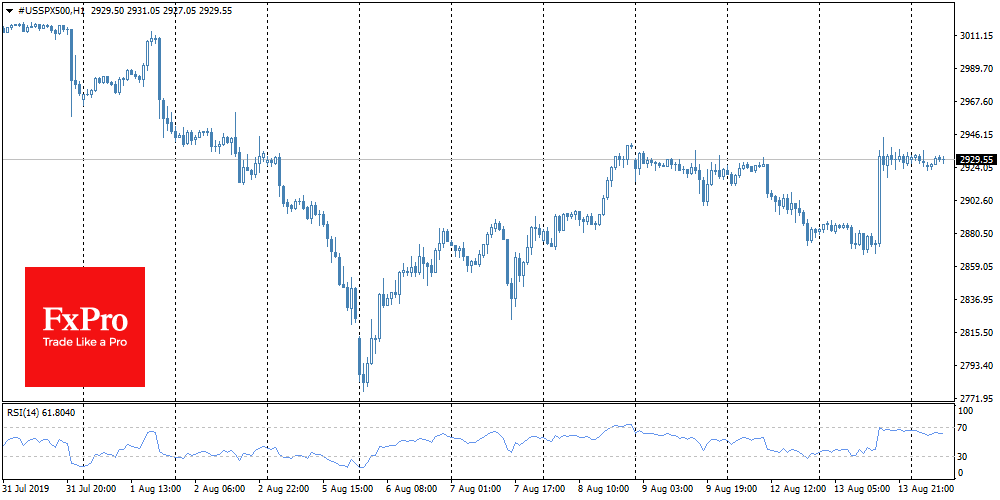 An alarming surge of inflation in the U.S. Trump’s reason for postponing the introduction of tariffs was to take care of consumers so that they could avoid a price spike before the high pre-Christmas season, as the tariffs promise to result in higher prices. Indeed, the tariffs would be bad news in light of the already rising inflation. Fresh estimates of consumer inflation in the U.S. have exceeded expectations. The core price index (excluding food and energy) grew 0.3% in June and July consecutively (the sharpest two-month increase since 2005) and accelerated to an annual rate of 2.2%, where it was last year when the Fed raised rates quarterly. This is a clear argument against the Fed’s rate cuts, which could further spur inflation.

German economy turned down Separately from the U.S. data, it is worth noting a sharp decline in business sentiment in Germany, where the ZEW index collapsed to its lowest level in 8 years. In addition, wholesale prices are declining to last year’s levels, while consumer inflation is growing by 1.7% YoY.

China slows down again The data that came out of China in the morning is also more pessimistic: after the spike in June, the growth rate of the production sector slowed down to 4.8%, the new 17-year lows. Investment and retail sales also disappointed, returning to a slowdown. At the same time, consumer inflation is gaining momentum, according to last week’s data.

Mild stagflation? In normal times, rising inflation is an important indicator of economic health and consumer demand. However, in this case, there is a risk of a soft form of stagflation developing, as price increases are spurred by tariffs. At the same time, central banks are unable to hold back price rises through rate increases, so as not to hamper the already weak economic growth.

Budget is full of debt Separately from the inflation and production sector, the budget policy should be mentioned. Both in China and the United States, the authorities have tried too hard to stimulate growth in “normal times,” so that now the gunpowder reserves are depleted. The U.S. budget deficit since the beginning of the year has already exceeded last year’s levels, and the total debt exceeds 105% of GDP or 22.5 trillion. China’s national debt is not so great – 9.5 trillion or 62% of GDP, but most experts point to the debts of provinces and cities that are not visible on the surface but also deplete resources for growth.