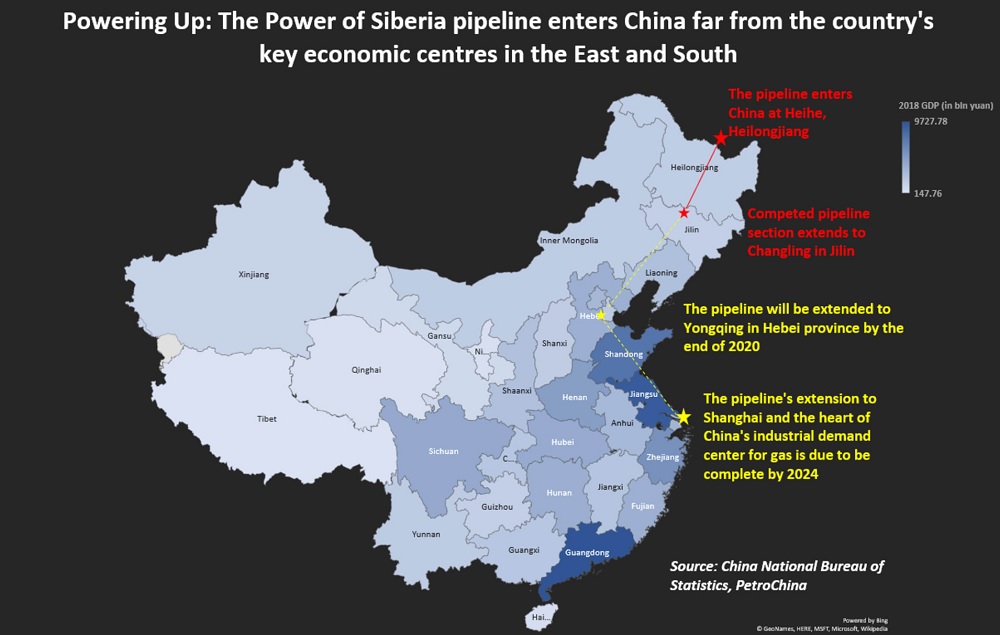 A new natural gas pipeline connecting Russia and China is the latest example of increasing collaboration between Moscow and Beijing in the Arctic Circle. The pipeline comes after China unveiled a plan nearly two years ago called the “Polar Silk Road,” expanding its campaign for influence to the Arctic. While Beijing has branded itself as a “near-Arctic state,” that far-stretched claim on the region is dependent on its partnership with Russia.

In a $400 billion deal signed in 2014, the 3,000 km long “Power of Siberia” pipeline stretches from Russia’s Siberian fields to China’s historically coal-burning northeast.  That region is an attractive market for Russia, as it “has low affordability for high-priced gas” compared with regions farther south which already have “well-established gas markets” with a diverse supply mix, IHS Markit said in a Monday report.

“New exports to this rapidly growing gas market is a growth strategy for the company,” but the European market will still remain a “top priority,” IHS said. Reuters reported that Russia’s Gazprom expects the LNG pipeline to initially supply 4.6 billion cubic meters (bcm) of gas in 2020 before ramping up to its full capacity of 38 bcm by 2025.

In return for access to the rich resources of the Arctic, China is offering Russia capital said Zhixing Zhang, senior East Asia analyst at geopolitical intelligence platform Stratfor. “So far, such cooperation primarily focuses on energy development. Whereas Moscow is satiating China with the access to resources, Beijing offers Moscow the capitals it needed for Arctic development,” said Zhang.