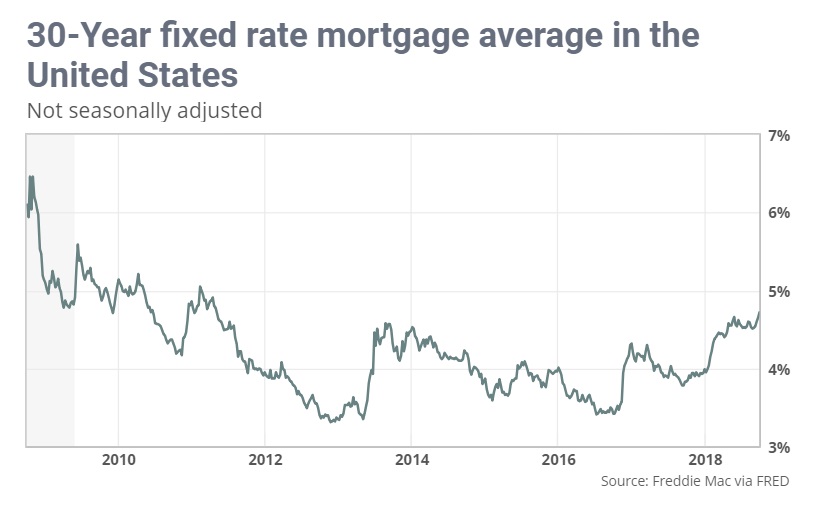 Rates for home loans jumped along with yields in the broader bond market, taking financing costs to a recent high and raising fresh questions about the effect of another headwind on a housing market that’s already sputtering. The 30-year fixed-rate mortgage averaged 4.72% in the September 27 week, up from 4.65%, mortgage liquidity provider Freddie Mac said Thursday. That marked the fifth straight weekly gain for the benchmark product, and took it to its highest point since April, 2011.

Mortgage rates track the U.S. 10-year Treasury note TMUBMUSD10Y, -0.33% , which powered higher over the past week as investors braced for the Federal Reserve to raise short-term interest rates for the third time this year. The past week has brought a flurry of housing data, none of it rosy. In August, sales of existing homes were flat, sales of new homes were higher but sales tallies in previous months were marked sharply down from initial estimates, and home-contract signings swooned.

Economists remain optimistic that fundamentals should re-assert themselves. In a release out Thursday, Freddie’s chief economist, Sam Khater, said “consumer confidence is at an 18-year high, and job gains are holding steady. These two factors should keep demand up in coming months.” And the chief economist for the National Association of Realtors, Lawrence Yun, pointed to signs that homeowners are more ready to put their properties on the market as prices keep moderating. “As long as there is job growth, rising mortgage rates will hinder some buyers,” Yun said. “But job creation means second or third incomes being added to households which gives consumers the financial confidence to go out and make a home purchase.”