Manufacturing slow down as the price for trade uncertainty

The markets are cautiously on buy for American stocks, and the dollar adds on fears that trade conflicts are seriously stifling the business sentiment in Europe and Asia. The MSCI Index of the Asia-Pacific region ex Japan loses 0.3%, Nikkei 225 decreases by 0.1%. Pressure on the European exchanges increased after the weak production PMI, indicating a negative impact on the economy of the USA trade disputes region.

The dollar index had kept above the 95.00 level by the end of the day. The single currency is traded near 1.16, as at the start of trading on Monday, and the British pound lost 0.8% within a day for the same time to $1.2860. Pressure on Sterling intensified after the news about the decline in production PMI of the country to the minimum since the referendum on Brexit.

Asia’s business activity is also decreasing on fears of increasing trade wars, which causes the outflow of funds from the stock markets and currencies of the region. The Indian rupee updates its historical lows to the dollar, and the Argentine peso lost more than 3% on Monday. The Turkish lira exchange rate did not change a lot on Monday, as the central bank of the country made it clear that it was preparing some measures to combat huge jump in inflation. In all cases, the central banks of developing countries are forced to tighten their policy by various measures, which will almost inevitably raise credit rates for companies and consumers and will slow the growth.

PMI indices for Europe are also in decline, but are at a higher level, reflecting a robust growth rate, while in Britain and China the production growth is close to stagnation, and has been losing noticeably since the beginning of the year. The latest estimates for August on the United States will be published today, and we have yet to see whether they confirm or contradict the overall trend. According to previous estimates by Markit, the production activity in the United States decreases, but remains at a high level as in Europe. ISM estimates do not mark a certain trend for recent months. 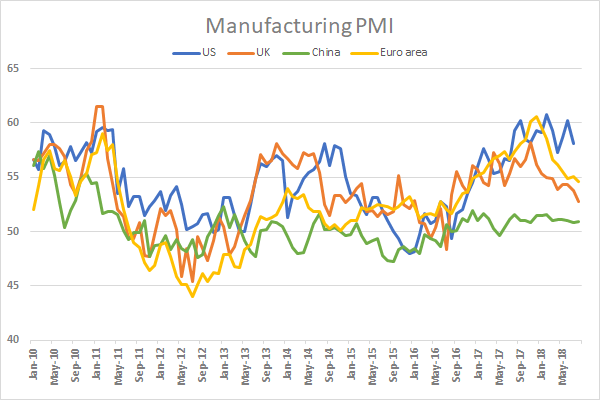 Maintaining a high rate of the economy growth despite the threat of trade wars and tightening of the monetary policy favourably distinguishes the U.S. markets from the rest of the world, creating an objective craving in the dollar and stocks. This draught can be intensified with the onset of autumn as the new fiscal year approaches.