Home › Market Overview › Insurance back in vogue as volatility returns

Insurance back in vogue as volatility returns

Volatility returns to the financial markets. In the previous two days, investors had to return to the expectation that trade wars may widen and deepen in the coming months. Hopes for a soon-to-be-signed phase one trade deal began to melt after Trump’s words that it might have been better to make a deal with China after the 2020 elections. Later, the Ministry of Commerce also made it clear that the priority was the essence of the agreement, not the speed of its conclusion. Isn’t this an eternal trade war?

The VIX Volatility Index declined below 12 last week, almost a year’s low. Now it is close to 16. And this is an important point, as it makes us look with suspicion at the near future of the markets. A reversal of the VIX from shallow levels is often the precursor to a massive stocks sell-off. That can start as profit-taking but often quickly becomes a sell-off at the background of fear of further prospects. At the end of the year, both reasons can be much more pronounced than usual.

The S&P500 index showed signs of slippage at the end of November and lost 1.8% on the first two trading days of December. This decline is very close to replicating the dynamics of the index in early October and August. The S&P500 futures soon found support near the 200-day average. Now it is at 5% distance from the current market quotes, leaving a severe potential for decline. 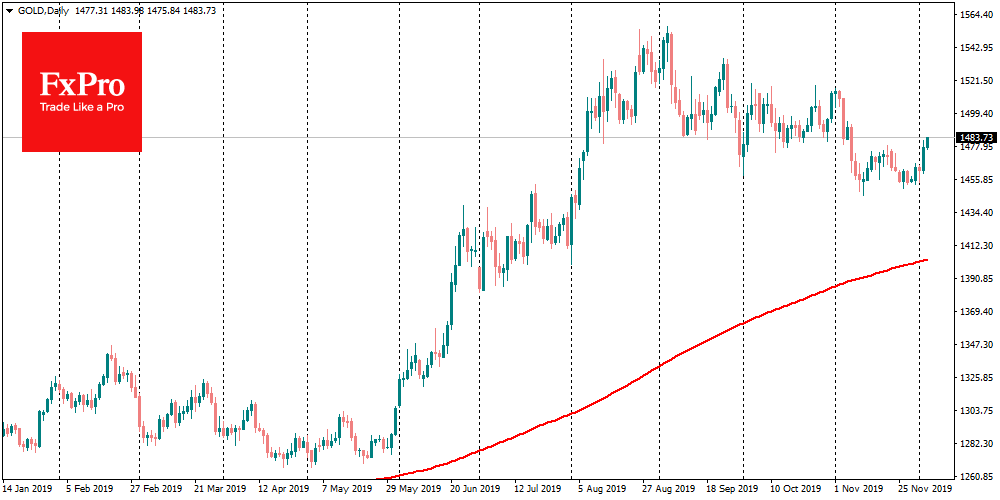 The jump of market turbulence very quickly turned in favour of gold. It jumped more than 1.4% in the last two days, starting from the lows of November $1,450 to above $1,480 at the time of writing. Further growth of anxiety in the markets may well continue to push the quotes upwards to the peak levels of September.

Protracted trade wars look a somewhat ambiguous prospect for the euro/dollar exchange rate. Moreover, the European Union may well be drawn into its own, albeit relatively small, front. So shortly, EURUSD will have to pass a necessary test for investors’ interest in buying European assets. The history of recent months suggests that the euro/dollar still correlates quite closely with the growth rate of the world economy. The slowdown or even anticipation of a strike causes pressure on the pair’s quotes. If this trend continues, EURUSD has more chances to fall to around 1.09, rather than grew 1.12 by the year-end. 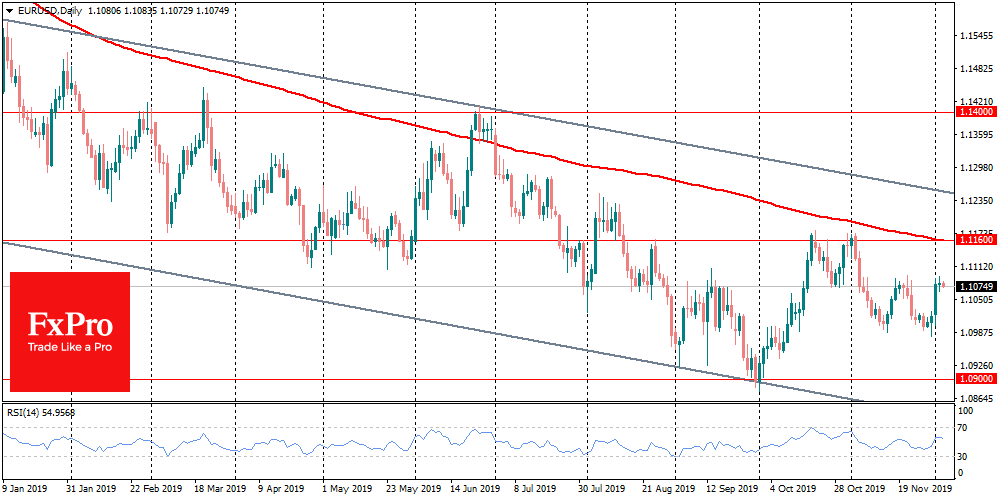 In the conditions of increased uncertainty, the dynamic of protective currencies becomes a good indicator of traders’ sentiment. And now they continue to give alarming signals. USDJPY after some rebound during the night returned to decline, trading at 108.50. The USDCHF also failed to bounce back, dipping into the area of the three months lows. A drop below 0.9840 vs the current 0.9870 risks turning into a signal of a reversal of the upward market trend, which prevailed since May.