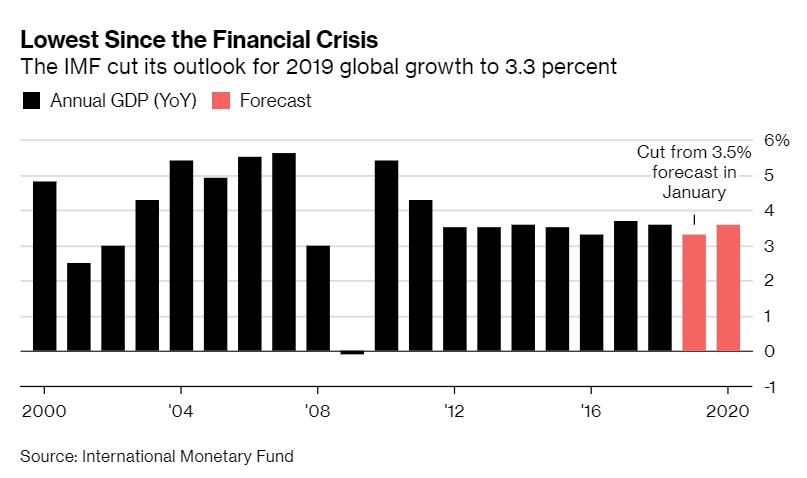 The International Monetary Fund cut its outlook for global growth to the lowest since the financial crisis amid a bleaker outlook in most major advanced economies and signs that higher tariffs are weighing on trade.

The world economy will grow 3.3 percent this year, down from the 3.5 percent the IMF had forecast for 2019 in January, the fund said Tuesday in its latest World Economic Outlook. The 2019 growth rate would be the weakest since 2009, when the world economy shrank. It’s the third time the IMF has downgraded its outlook in six months.

The global volume of trade in goods and services will increase 3.4 percent this year, weaker than the 3.8 percent gain in 2018 but reduced from the IMF’s January estimate of 4 percent, the fund’s report showed.

Global economic growth will recover in the second half of this year, before plateauing at 3.6 percent from next year, according to the Washington-based fund. A series of encouraging developments have boosted optimism about the world economy in recent weeks, including the decision of the Federal Reserve to put interest-rate hikes on hold and encouraging data from China’s manufacturing sector and the U.S. job market.