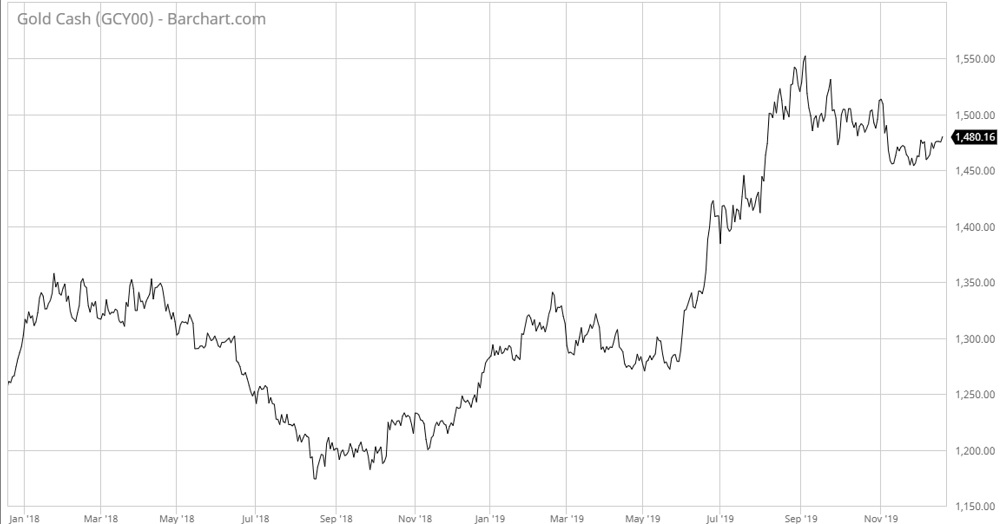 The price of gold has languished for the better part of four months, as technical resistance and the return of risk appetite undercut demand for the traditional haven asset. But if 2020 is anything like this past year, bullion’s breakout performance is set to continue. As I’ve written before, the key to gold’s continued success is real interest rates.

To say that 2019 was a breakout year for gold would be an understatement. Geopolitics, trade uncertainty and an aggressive stimulus push by global central banks aided gold’s ascent to fresh six-year highs. Beyond these immediate catalyst, one only has to look to real interest rates to get the full picture. Interest rates have not only fallen in a nominal sense, they’ve barely kept up with inflation. The yield on the benchmark 10-year U.S. Treasury yield, which moves inversely to price, hit three-year lows during the summer. A partial recovery still puts yields nearly one full percentage point below year-ago levels.

In the 12 months through September, the 10-year Treasury yield plunged from 3.20% all the way down to 1.44%. Over the same stretch, spot gold rallied from around $1,175 a troy ounce to $1,572. At its peak, bullion was up 22.6% for the year. After a massive correction, the yellow metal is still up more than 16% for 2019. The macro trends that emerged in 2019 – a weakening global economy, central bank easing, negative bond yields and U.S.-China trade uncertainty – will remain on the docket for 2020. In theory, gold should have plenty of runway to make further gains.