Home › Market Overview › Gold Is Having Its Best Week in 3 Years After Breaching $1,500

Gold Is Having Its Best Week in 3 Years After Breaching $1,500 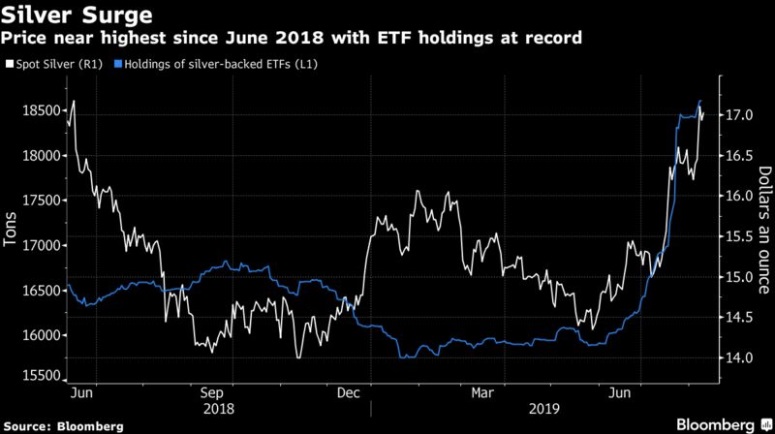 Gold is poised for its best week since 2016 as the metal holds onto gains that propelled it past $1,500 an ounce and silver trades near a 14-month high. Both metals have rallied amid worries about the global economic outlook and as central banks around the world continue to cut interest rates. The ongoing trade war between the U.S. and China has also increased demand for haven assets, with traders and analysts in Bloomberg’s weekly survey near-unanimous on the bullish outlook for gold.

Further signs of a global economic slowdown were evident on Friday as the U.K. unexpectedly registered its first economic contraction since the aftermath of the financial crisis. European shares fell with U.S. equity futures, while Asian stocks were mixed as positive sentiment from a strong day on Wall Street was offset by resurfacing trade tensions. Investors are continuing to flood into exchange-traded funds backed by gold, with holdings rising for a ninth day Thursday to the highest since March 2013. Silver ETFs have also seen large inflows and are near the highest on record. Goldman Sachs Group Inc. sees the growth in ETF investment as a key factor behind the bank’s forecast that gold will climb to $1,600 over the next six months.

Gold Is Having Its Best Week in 3 Years After Breaching $1,500, Bloomberg, Aug 9
Article Rating
Rate this post
Related Articles