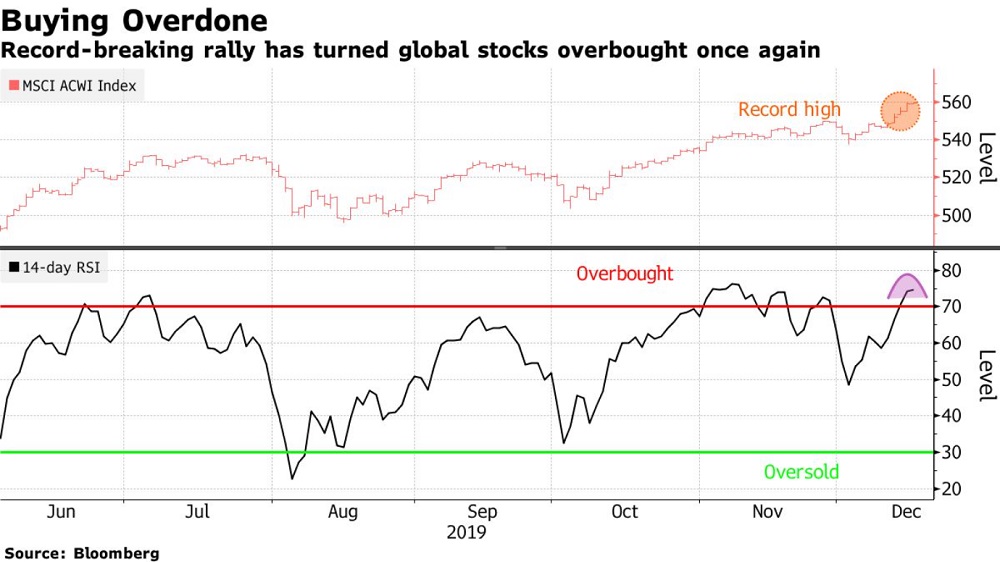 U.S. stock futures struggled for direction while European shares fell on Tuesday as the global rally in equities eased. With the sugar rush of a partial trade deal between the two largest economies fading, investors pushed up the dollar and Treasuries.

Contracts on the S&P 500 index pointed to a weak opening after after a record-high close that was underpinned by the partial U.S.-China trade agreement. Boeing Co. fell in pre-market trading after deciding to halt production of the grounded 737 Max model in January. The Stoxx Europe 600 likewise dropped from Monday’s record close, as Unilever tumbled in the wake of a sales-growth warning and led a slump in personal goods makers.

U.K. shares were particularly volatile, and sterling sank the most since July versus the euro after newly elected Prime Minister Boris Johnson proposed a legal change that revived the chances of a no-deal Brexit. Earlier in Asia, a benchmark stock gauge rose to the highest level since mid-2018. European government bonds drifted higher. The dollar advanced against most of its biggest peers.

Investor sentiment won a boost from the U.S. suspending its planned Dec. 15 tariff hike on Chinese imports. While a $44 trillion global gauge of stocks is close to an all-time high and benchmarks in Europe and the U.S. are also hovering near record levels, concerns linger over the strength of a China accord whose full details aren’t public. The warning by personal-goods bellwether Unilever also took some of the shine from improved forecasts for the global economy.