Geopolitics is a fragile foundation for oil growth

Oil starts the week with an increase of 1% to $63.95 per barrel Brent due to the Middle East increased geopolitical tensions. Saudi Arabia and the U.S. are building up their military presence in the region and have increased pressure on Iran, accusing it of attacking production facilities on September 14. The U.K. for its parts believes that Iran was behind the attacks, but it will issue the joint statement with the E.U. later Monday. This statement can have a notable impact on the volatility of oil prices.

The U.S. and Saudi Arabia are trying to use this situation to put pressure on Iran and accord on the most stringent joint response. There are concerns that this may be the beginning of a lengthy political or even military campaign. In turn, it creates upward pressure on oil in the coming days. 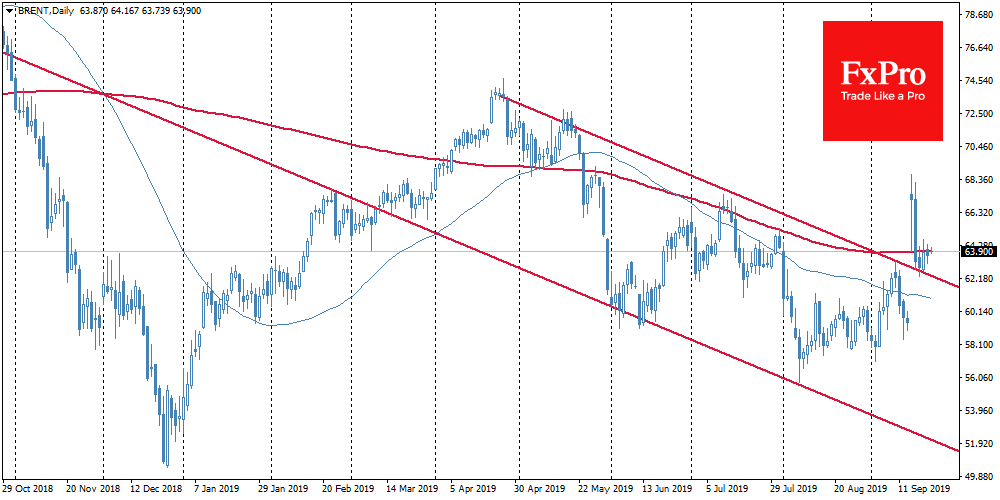 Increased geopolitical risks have probably led to a change in the months-long black gold trend. Brent moved in a downward channel since the end of April on fear of a global slowdown risks. Expectations of progress in trade negotiations and easing of monetary policy formed a cautious upward momentum in August and early September. Moreover, the events in Saudi Arabia, it seems, helps Cude Oil finally broke the downward trend. Brent jumped above 50 and 200-day moving averages, which may attract additional interest from buyers.

The current impulse of oil growth may well take it to this year’s highs of $72-$74. However, geopolitical concerns can hardly be considered a reliable investment idea. A year earlier, fears of tough sanctions increased oil to $85 per barrel, but only to turn it into a decline to $50 in the subsequent three months.

As the FxPro Analyst Team said, the current (increased) prices are primarily due to an unnatural reduction in production by OPEC+. The U.S., Russia and even Saudi Arabia can significantly increase their output within a few months, covering the possible deficit due to the decline in production in Iran. Besides, Iraq and Venezuela are set to increase their production after a long decline. In this regard, in our view, the main potential problem of the oil market is still insufficient demand, rather than supply disruptions.

So now, the growth of oil at the expense of geopolitics alone is a fragile basis for the growth of energy resources prices. The situation may turn around by 180 degrees very quickly. Policymakers on both sides of the Atlantic, as well as in China, are taking steps to stimulate demand, and expensive oil may become an additional restriction to economic growth. These considerations may well prevail over the U.S. and E.U. during the negotiations at the U.N. General Assembly this week.