World markets once again increase craving for protective assets. The Friday rebound was more like a short-term fixation after a strong movement. On Monday, the US stock indices gave up some positions: S&P500 sank by 0.6%, DJI lost 0.4%.

Tuesday’s trading session in Asia began with a modest growth, but at the time of writing the Chinese indices went to the red zone: Hong Kong’s Heng Seng has decreased by 0.6%, China A50 and MSCI Asia without Japan returned to the levels of the day opening, rolling back into the area of half-year lows. Nikkei225 is adding after a decline of the yen, returning from the oversold zone.

Asia’s markets have returned to the cautious tone after the data on the weakening of price pressures in China. PPI growth slowed in September to 3.6% yoy, declining for the third month in a row. Manufacturers have to reduce prices in the fight for the market share against the backdrop of the U.S. tariffs. At the same time, the consumer inflation is growing, accelerating to 2.5% yoy due to the fall of the yuan by 9% from June to August. This is a clear indication of the impact of trade wars on China’s economy, which promises only to gain momentum in the upcoming months. 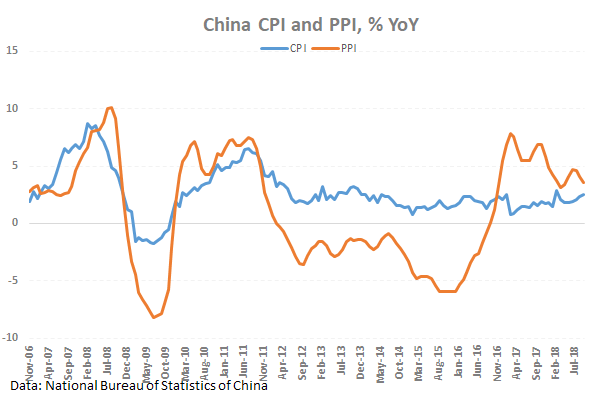 The cautious tone is also supported by the diplomatic tension between Washington and Riyadh in connection to the accusation of the murder of an American newspaper journalist, known for criticizing the Saudi Arabian authorities. The Kingdom has already hinted that it can use its role as a major player in the oil market. This could potentially lead to an increase in the rate of oil. However, the initial spike in opening quotations on Monday was not sustainable, and quotations returned to the levels near $80.50. The cautious markets about China’s prospects and the global economy can continue to exert pressure on oil.