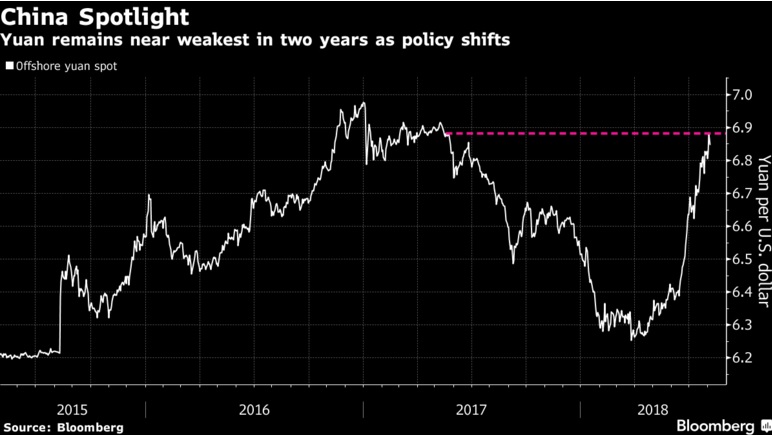 Banks were among the biggest losers in the Stoxx Europe 600 Index after HSBC’s earnings disappointed. Contracts on the S&P, Dow and Nasdaq pointed to an uninspiring open after the Shanghai Composite Index extended losses. Oil edged higher and metals were mixed. The yield on 10-year Treasuries steadied at 2.94 percent.

The Bloomberg Dollar Spot Index climbed for the fourth day in five sessions, and the yuan pared some of its gains following a rally triggered as the Chinese central bank on Friday made it more costly to short the currency. The euro was flat after German manufacturers took a hit in June, and the pound fell for a third day following the prediction by a key U.K. minister that the nation may face a messy split from Europe.

Rhetoric in the trade war was ramped up again this weekend, with U.S. President Donald Trump saying he has the upper hand, and Beijing responding through state media that it is ready to endure the economic fallout. The Asian country on Friday stepped in to try to cushion the yuan after a record string of weekly losses saw the currency closing in on the milestone of 7 per dollar.

The euro fell 0.1 percent to $1.1562, reaching the weakest in almost six weeks on its fifth straight decline.