Home › Market Overview › Euro and Gold instead of Dollar

Euro and Gold instead of Dollar

Market focus The Australian Central Bank cut its interest rate to 1.25%, to a new historical low. This decision was widely expected by the markets, therefore did not cause pressure on the AUD. At the same time, monetary policy has globally returned to the centre of investors’ attention, who are waiting for growth support from the central banks. This is another episode of global policy easing by the central bank. Prior to this, we saw stimulus from the PBOC, a cut of the RBNZ rates and a pause in the normalization from the Fed and the ECB. However, weak data from the U.S. last night surprised the markets. At the moment market participants are trying to assess whether current measures are sufficient to sustain economy and market growth. 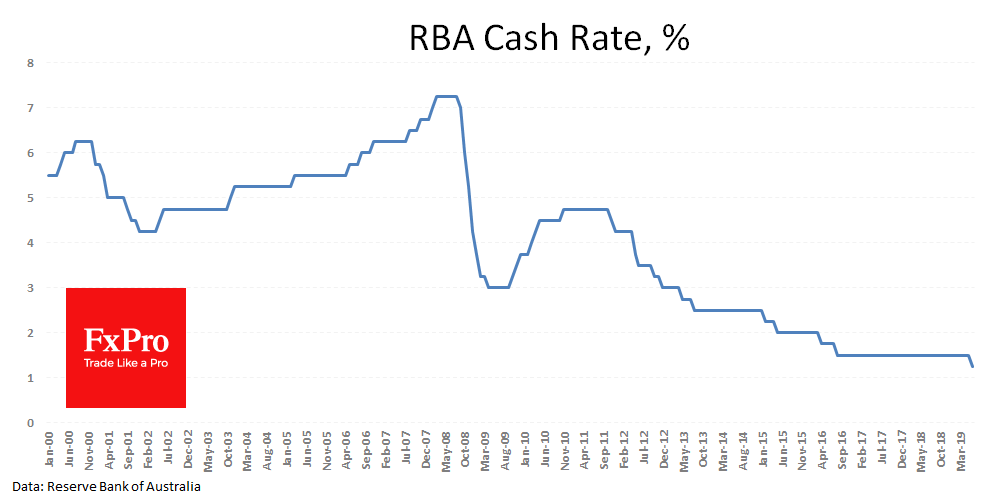 Stocks Weak U.S. Manufacturing ISM data caused a fairly volatile session on Monday. US indices managed to move away from the intraday lows set at the start of trading on Monday, but they failed to expose growth. In the morning there are cautious sales from levels near Friday’s close levels. Chinese indices show a 1% decline since the start of the day, sending HengSeng to the new lows from January on fears of the consequences of trade disputes. 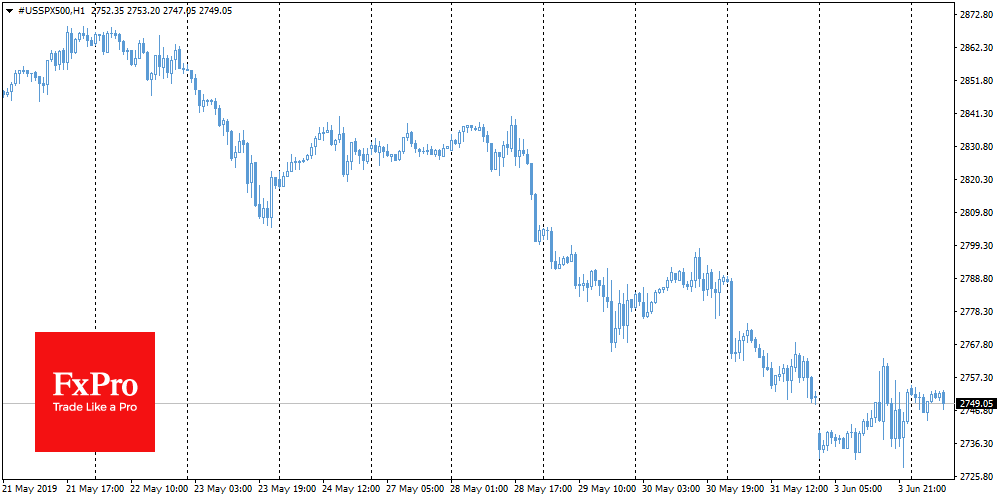 EURUSD The single currency bounced off local lows on Monday. EURUSD returned to 1.1250, the area of local highs for the past six weeks. Formally, the downward trend broke is not confirmed as the bulls need the pair to consolidate above the previous highs at 1.1250. On the other hand, we have already received several positive signals, when EURUSD exceeded the 50-day average and the resistance of the downward channel, closing the day above these levels. 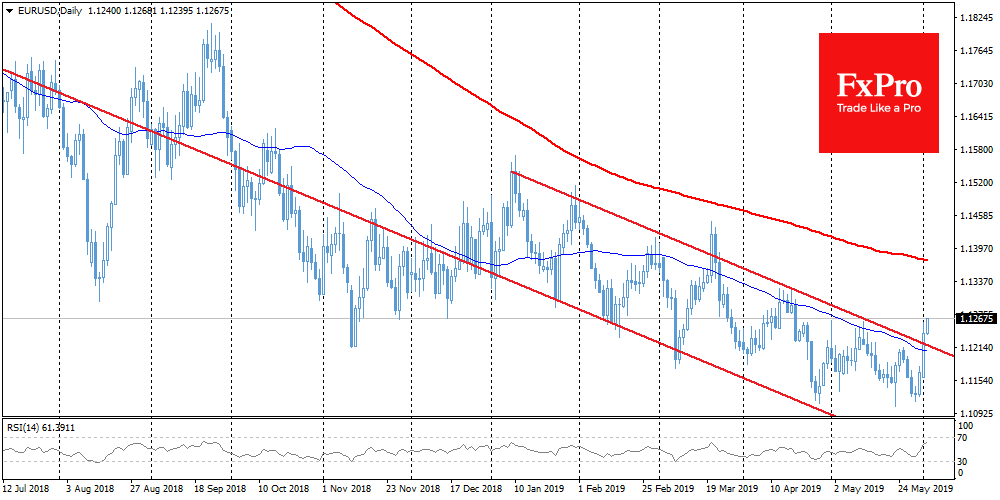 Gold Gold rose on Monday to the highest levels since February, reaching $1327 per ounce. In the first hours of the Tuesday trading session, there is some correction after purchases in the previous three trading sessions. The sharp decline in the yield of long-term US government bonds (to a 2.1% for UST-10) and the weakening of the dollar were the factors supporting gold in recent days, forcing investors to consider gold as a more perspective asset. The next milestones on the path of growth are the levels of $1340 and $1360, the highs of the current year and the last six years, respectively. 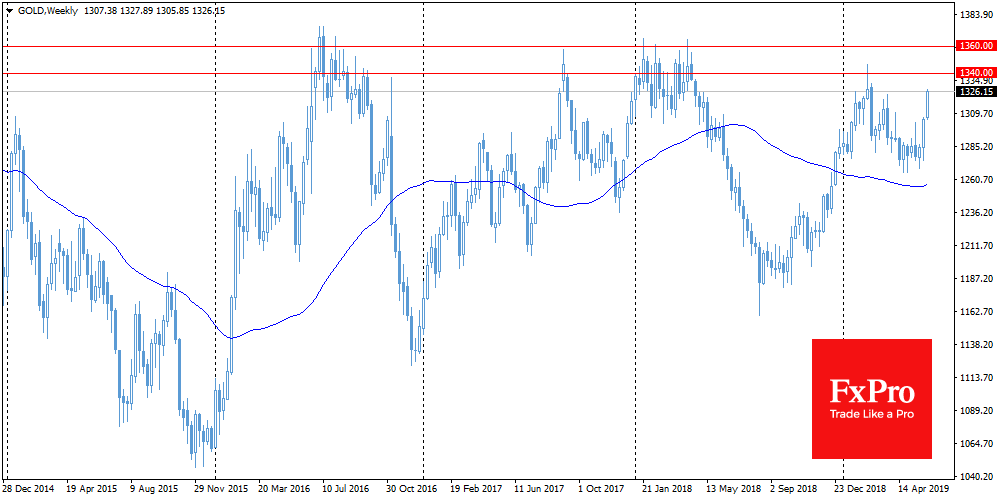 Chart of the day: Brent Oil began the week with attempts to bounce from the lows since February. However, by the end of the day sales increased again. This is an alarming sign of the predominance of bears in the market. The last time this happened at the end of last year. Oil ceases to react symmetrically to the news, falling sharply on the bad news or even without it, without growth on the good news. After closing the trading session at a level below $53.2, WTI formally fell into a bear market territory. For Brent, this mark (decline by 20% from the peak) passes through $59.80 against the current $60.70. 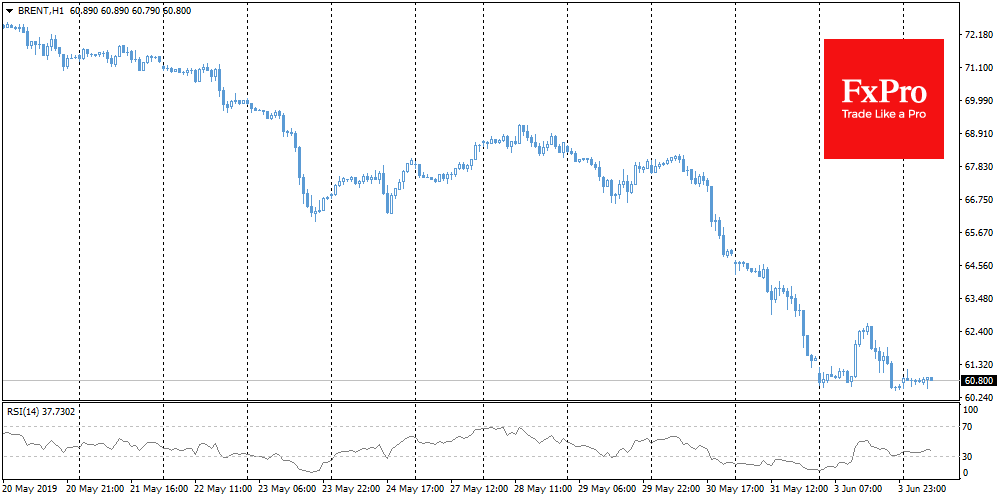