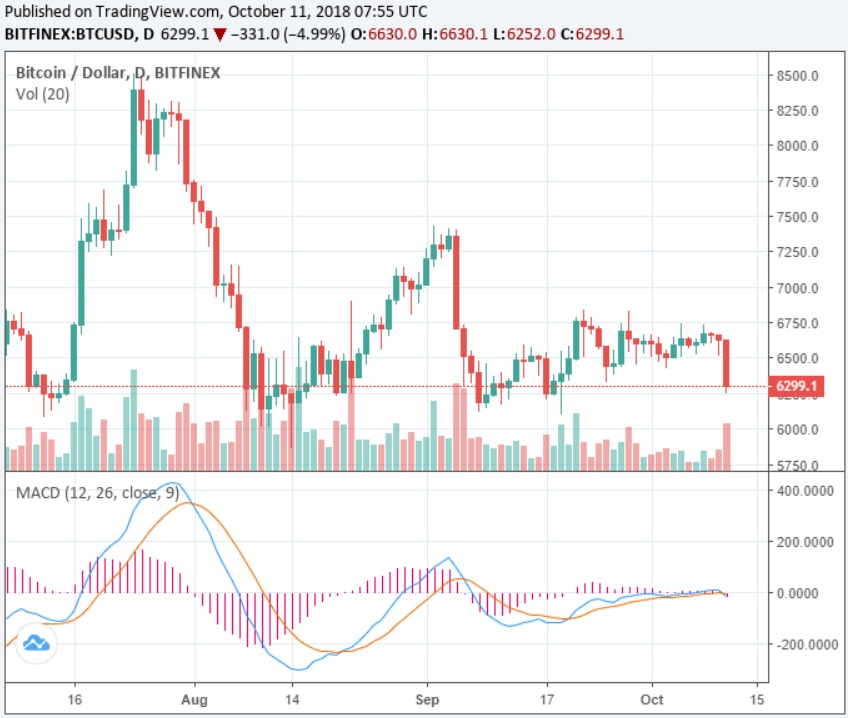 Ethereum (ETH), Ripple (XRP), and Bitcoin Cash (BCH) have declined by 12 to 13 percent over the past 24 hours, as Bitcoin recorded a sudden dip in price from $6,600 to $6,250. Subsequent to demonstrating a rapid sell-off, the Bitcoin price recorded a 4 percent drop within a 30-minute period, recording one of its steepest short-term drops in recent months. The downtrend of Bitcoin led other major cryptocurrencies and tokens including XRP, ETH, and BCH to fall substantially. On October 7, CCN reported that the volume of XRP, the third most valuable cryptocurrency in the global market, plunged by more than 50 percent in less than 48 hours.

Yuji Nakamura, a Tokyo-based technology journalist, stated that traders in Japan and South Korea likely triggered the drop in the price of Bitcoin in the past 24 hours. “Crypto getting spanked this morning in Asia. Hearing that Japanese day traders are leading the move lower, selling crypto to pay for unexpectedly big margin calls in stocks. Question is will Bitcoin $6,000 hold?” Nakamura said. The volume of major cryptocurrency exchanges in Asia including Bithumb, Bitflyer, and Upbit have increased by a large margin in the past few days, suggesting that the sell-off of BTC was led by investors in Asia.

At the time, traders were concerned that XRP demonstrated such a rapid decline in its daily trading volume in a period in which the project has secured some of its most crucial partnerships including the deal with Banco Santander to utilize XRP to fuel the bank’s mobile application. “The 50 percent decline in the volume of Ripple and the lack of momentum of tokens have shown that investors are not willing to take high risk, high return trades in a period of uncertainty. Ripple has had two productive months in September and October, securing major partnerships with influential financial institutions including Banco Santander,” the report read.

Since then, the volume of XRP has fallen from nearly $2 billion to $670 million. The significant drop in the volume of XRP led the cryptocurrency to continuously decline in value, recording another 13 percent decline on October 11. Bitcoin Cash, which demonstrated strong momentum above the $500 mark, also demonstrated a loss of around 12 percent to $450. The worst performing cryptocurrencies on the day include WanChain, Theta Token, Nano, Ripple, Tron, NEM, and Waltonchain, all of which dropped by more than 13 percent against the US dollar.