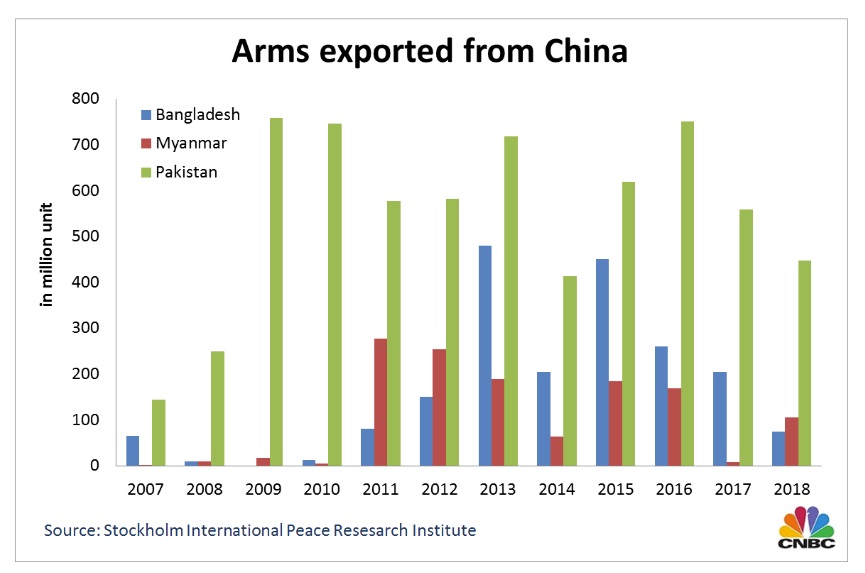 Beijing has not only become a major defense spender, but increasingly analysts say China is also turning into a top arms exporter. Over the past five years, China was one of the largest exporters along with the United States, Russia, France and Germany and China, according to data from the Stockholm International Peace Research Institute (SIPRI) published in March. Those nations accounted for three-quarters of the total volume of arms exported, the data showed.

China has exported 16.2 billion units of ammunition — mostly to countries in Asia, the Middle East and Africa — over the past 12 years, according to SIPRI data. Beijing is set to commemorate the 70th anniversary of Communist China on Oct. 1. The country did not open up its economy until 40 years ago and since then quickly became the world’s second largest.

Since 2007, China’s top arms export countries by total units are Pakistan (6.57 billion units), Bangladesh (1.99 billion units) and Myanmar (1.28 billion units), according to SIPRI. All three countries are part of China’s global development strategy — the Belt and Road Initiative. In 2018 alone, China sold Bangladesh 75 million units, Myanmar 105 million units and 448 million units to Pakistan, according to SIPRI’s calculations. While the number of countries China exports to has increased drastically, SIPRI said in its 2018 Trends in International Arms Transfer report that major arms importers such as India, Australia, South Korea and Vietnam “will not procure Chinese arms for political reasons.”