Caution returns to the markets

Market focus The U.S. and China Inflation data may become a significant force causing movements in the stock and currency markets. Indicators from China, published in the morning, showed an acceleration in consumer inflation in May to 2.7% y/y. But a deeper study of the report noted low core inflation (ex. food) at just 1.6% y/y. Producer prices slowed from 0.9% to 0.6% y/y, also indicating a weakening of inflationary pressure. Weak inflation opens up opportunities for lowering rates and other impulses. After data from China attention shifted to US figures. Markets, on average, expected CPI to slow down from 2.0% to 1.9% y/y. However, a slowdown in producer prices from 2.2% to 1.8% y/y increases the chances to weaker consumer inflation data in May. Lower inflation can increase the pressure on the dollar, spurring on expectations of an early rate cut from the Fed. 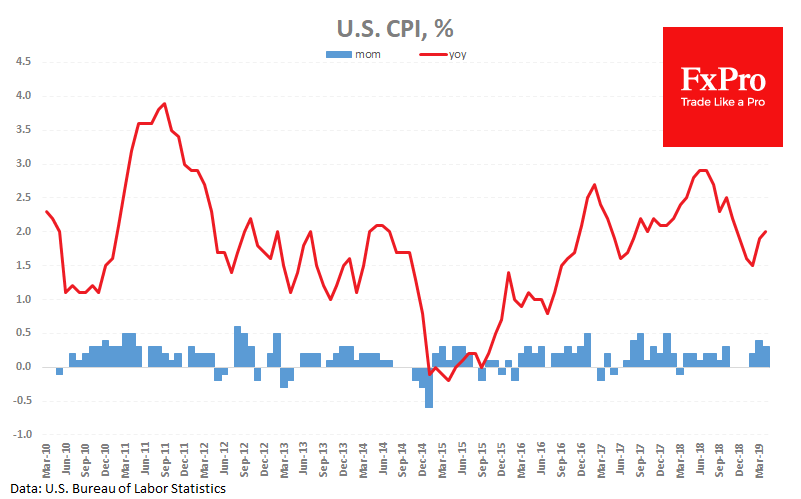 Stocks Stock indices showed minor changes against levels of the previous day. It is worth paying attention to the increased caution of players under the closure of the American session. SPX touched monthly highs at 2910 and then quickly turned to sell-off at the close of the day and eventually decreased by 0.1%. Such market dynamics often precede a turn to decline. Inflation data from the United States can strengthen or neutralize maturing correction. As the FxPro Analyst Team said, a decline below 2872 (MA50) can be an additional technical factor in favour of bears. 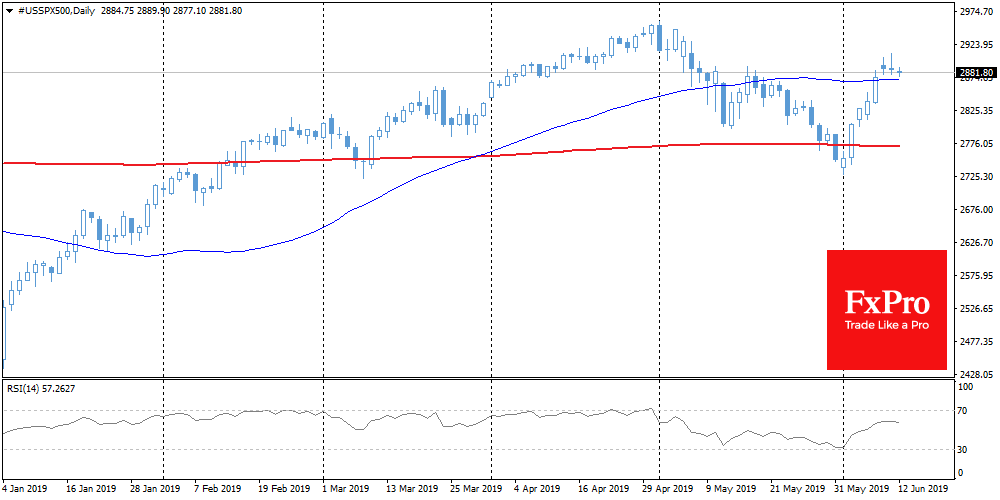 EURUSD The single currency for Tuesday was mostly in the range of around 15 pips. At the end of the day, the euro climbed from 1.1310 to 1.1325. Despite the relatively sluggish start of the week for the pair, it is worth noting the persistence of thrust to growth. The single currency avoids significant corrections after a reversal to growth on May 31. A new test of bullish sentiment in the markets could be the 200-day moving average of 1.1360 at the moment. The market is consolidating on the approach to this level. A sharp tide over this level often forms a strong trend in the direction of the breakdown. That is, in our case, is able to enhance growth. 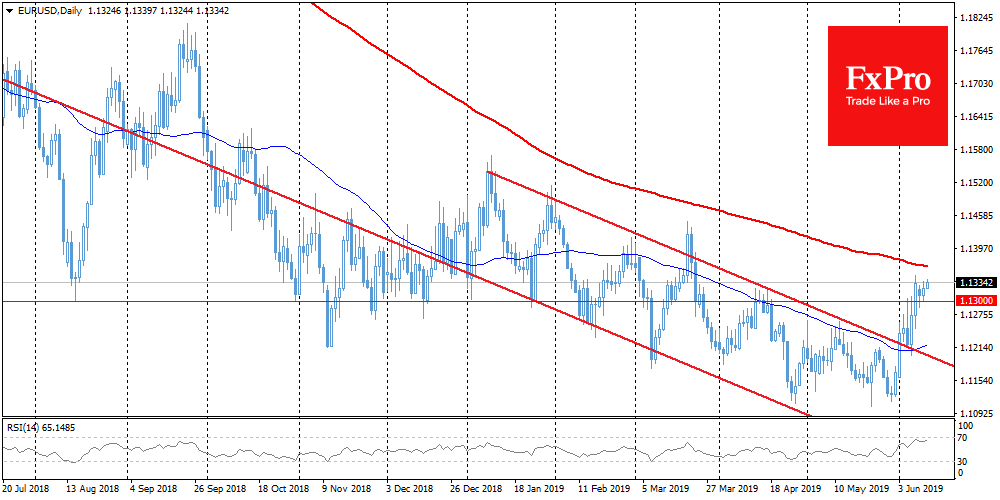 Gold Gold returned to growth after touching $1320 and is currently trading at $1335, adding 1.1% to Tuesday’s lows. Such a turn to growth may be a signal of increased anxiety of markets, despite the relatively cautious movement of the stock indices. $1340 level is again becoming a reference point. The ability to gain a foothold above can further inspire buyers. 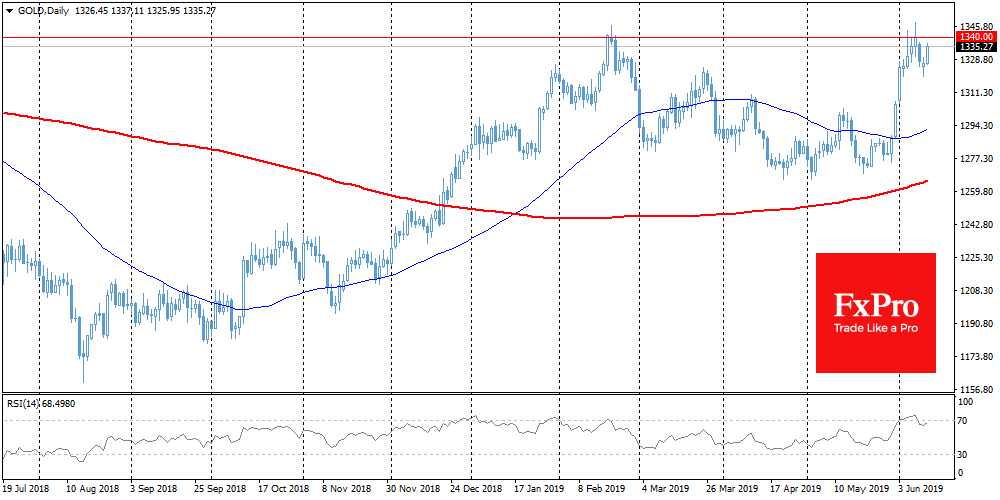 Chart of the day: USDCHF The Swiss franc added about 3% against the dollar within the last month. This week, the USDCHF pair halted its decline around 5-month lows. The franc gains momentum both as a result of increased thrust into defensive assets, as well as following the euro, which over the past weeks has been reversing to growth against the dollar. A quarterly meeting of the Swiss National Bank (SNB) will take place on Thursday, where the accompanying statement may be in the focus of attention. Market participants will search for signs of possible softening of rhetoric in the wake of other global central banks. 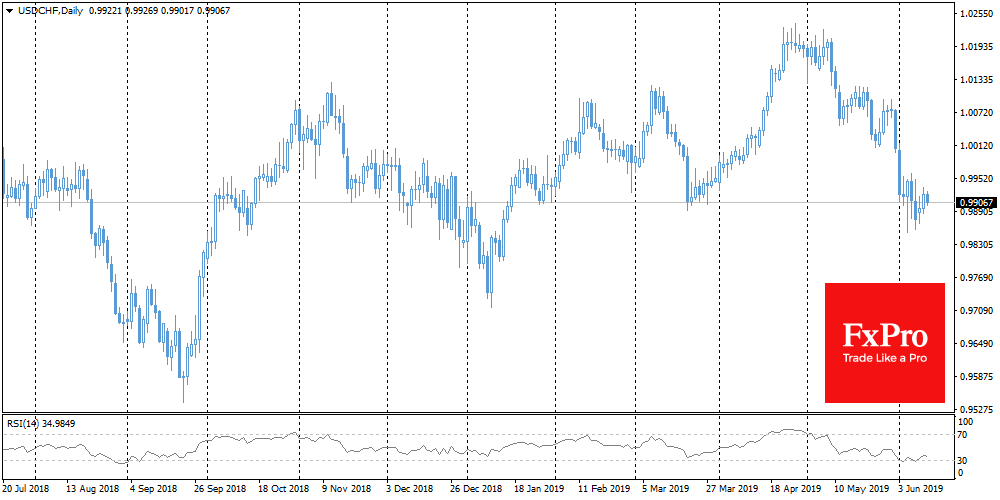