BTC is developing a decline at the beginning of the week: there is a struggle for a threshold of $10,000. Crypto market always balances on the verge of optimism and pessimism: this time was no exception. Congress spoiled enough the mood of all investors last week: bulls stopped buying, and bears are increasingly willing to sell. Concerns are growing regarding the intensifying of the sale-off after the decline under the round $10’000. 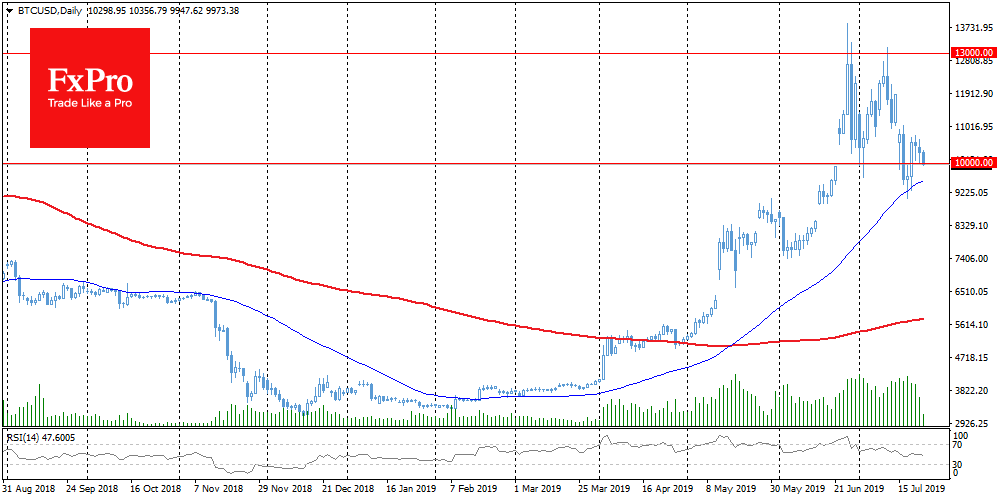 Bitcoin is slowly slipping to an important $10K level. It seems that now all market participants are waiting for new market signals. Nevertheless, cryptocurrencies are more prone to decline in such periods. For the last day, BTC loses more than 5% and trades close to $10K. Decrease under the round level of $10K may provoke an increase in sales, giving rise to doubts that the first cryptocurrency is able to further develop the rally.

Bitcoin failed to get support due to the news about the launch of the Bakkt platform testing. Deliverable futures on BTC are an extremely long-awaited story in the market, which was accompanied by a lot of failures with regulators and hopes in connection with institutional investments. Apparently, these futures have been waiting so long that they simply “burned out” and the news can’t impact the market as it used to be.

Almost all cryptocurrencies in the TOP-100 are in the red zone, but even now there are curious examples of gravity confrontation. Such a coin is Crypto.com Chain (CRO), which during the last day adds more than 30% and trades around $0.07. The developers have ambitious plans to implement the button “Pay Crypto.com” to the maximum possible number of sites. At the end of 2019, it is planned to launch a test network. The project has a mobile application through which you can buy tokens via bank card, as well as order the project’s Visa card. Apparently, the combination of plans to introduce a new payment system, the ease of buying tokens and the low threshold for entry have created the possibility of such impressive growth in contrast to the decline of the rest of the market.

At the same time, the analytical company Messari is trying to dispel myths about the criminal nature of Bitcoin. After extremely negative assessments by high-ranking U.S. officials, corporate analysts decided to check the data, based on the UN statistics on crime and drug trafficking, as well as Chainalysis data. They came to the conclusion that for each “Darknet-dollar” there is $800 in traditional currencies in real life. The criminal world is old-fashioned and prefers to work with well-established paper money schemes.