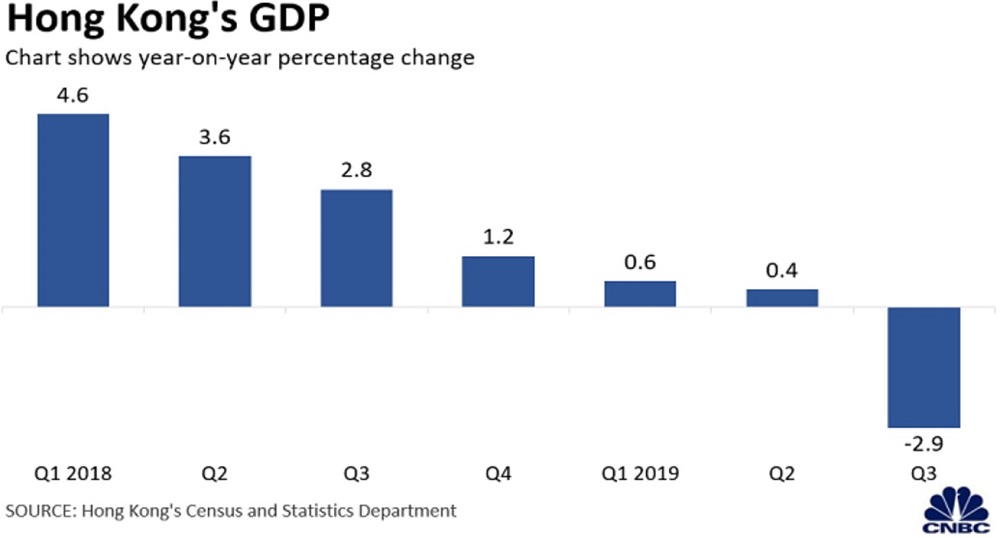 The protests, along with uncertainties such as the U.S.-China trade war, sent the Hong Kong economy into a recession for the first time in a decade. It could get worse for the city. Iris Pang, greater China economist at Dutch bank ING, projected Hong Kong’s annual gross domestic product to fall by 2.25% in 2019 and 5.8% in 2020.

Hong Kong consumers have been cautious about spending as the global economic outlook turned bleak early in the year. But the protests made consumers hold back spending even more, exacerbating the decline in the city’s retail sales.

Visitors from mainland China, who account for close to 80% of tourists in Hong Kong, fell by around 4.45% in January to October this year compared to the same period in 2018.

Despite the pressure on the economy, Hong Kong’s benchmark stock index — the Hang Seng Index — appears on track to end 2019 higher than where it started the year.

Hong Kong looks set to retain its position as the top market for new stock listings globally. That’s mainly thanks to a mega secondary listing by Chinese technology giant Alibaba and an initial public offering by brewery Budweiser’s Asia Pacific business, which helped the city surpass rival stock exchanges in the U.S. and mainland China.