Home › Crypto Review › Will companies support Bitcoin the way retail investors did it?

Will companies support Bitcoin the way retail investors did it?

The bulls once again supported Bitcoin without letting it drop below $9,700. At the beginning of the week, Bitcoin got a new impetus for growth due to the news from Bakkt, which received permission to launch delivery futures. Thanks to the support from the news background, Bitcoin jumped above the 50-day moving average. On Tuesday morning, the BTC traded above $10,800, showing an increase of almost 3% over the last 24 hours and by 15% above last Thursday’s low. 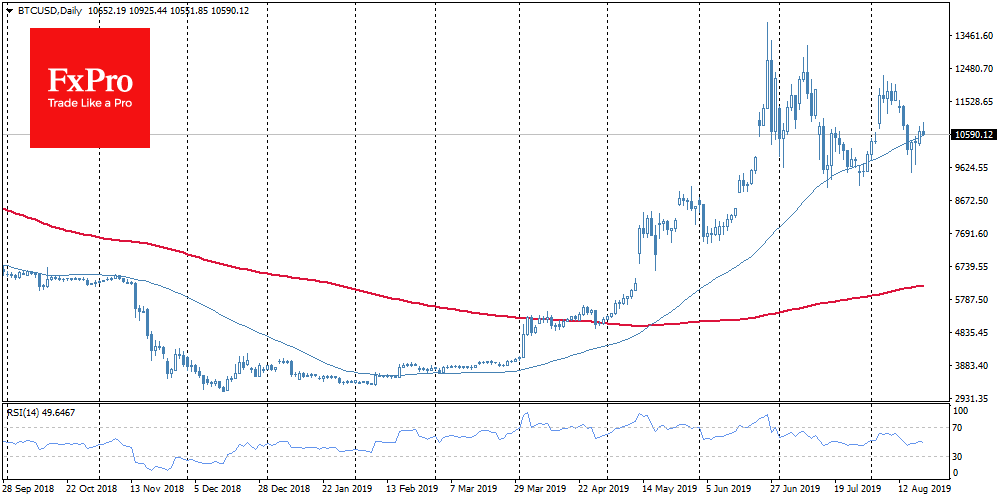 Actions of institutional investors will now come to the fore. Recently it became known that the largest American crypto exchange has bought the custodial service Xapo. Thus, Coinbase becomes the largest institutional crypto custodian in this sector. CEO of Coinbase Brian Armstrong stated that every week institutional investors invest $200-400 million in crypto assets. Basically, it is due to Bitcoin, which is also confirmed by the price dynamics of cryptocurrencies, which feel much worse than the first cryptocurrency.

The Crypto Fear & Greed index shows a rebound from extreme values of fear, which indicated an excellent opportunity to buy an asset. Last week the indicator reached 11, whereas now it is approaching 40. The higher the value, the stronger the demand for the asset and the closer the correction moment is.

Bitcoin mining is now at its historic high of 10.1835T. Over the last 3 months, it has grown by almost 52%. At the moment when the historical maximum of $20,000 was reached in December 2017, the difficulty of Bitcoin mining was five times lower. At that time, the low scalability led to huge logs of unconfirmed transactions, and now the market is ready to offer a much larger hashing power.

The hype surrounding Libra has subsided noticeably, but the project has created a momentum for the market. Recently, it became known that Binance is already planning to launch the Venus project: regional stablecoins will be linked to national fiat currencies. It is quite likely that success in this direction will be achieved not by large corporations, which are forced to fully comply with the strict requirements of the U.S. regulators, but by more flexible financial companies, which will have the opportunity to look for softer jurisdictions.