Bitcoin managed both to drop to $6,450 and bounce back by 8% in one week, having stabilized in recent days at $7,200. A steady sunk through $6,500 (November’s low) threatened to open the way to a further decline to $5,000 or even $3,000. To everyone’s relief, there were enough buyers to form a temporary bounce. It is quite likely that this support was from the unexpected side. 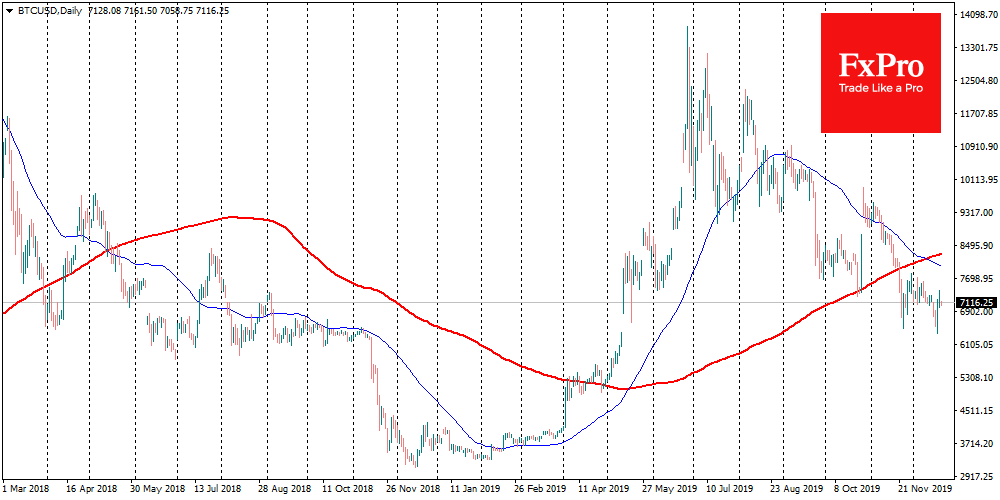 On Wednesday evening, it became known that Bakkt is showing record trading volumes, which is evidence of high demand from institutional investors. On December 18, Bakkt showed a futures volume of 7,160 BTC (at current exchange rate it is $51.5 mln). This is a very encouraging sign for the crypto market, as it indicates that institutional investors are not taking a bearish position, considering the current levels interesting to buy. However, the big question is how long this bullish spike may last. After all, the price has been in a clear downward trend since July, and there are still no fundamental reasons for the reversal.

Along with the price, the hash rate is often declining as well. In this case, the drawdown was 20%, and the indicators will likely return to normal soon enough. Attempts to estimate the break-even point for ASIC-miners led to the conclusion that Bitmain’s S17 generate profit while price is above $3,600, which means that the miners can still earn.

If bitcoin drops quickly and recovers quickly, ZCash situation is much more complicated. After the recent price slump, it looks like the nerves of the miners couldn’t stand the tension anymore, and they have started turning off their ASICs. The difficulty of mining dropped by 53%. It should be noted that the ZCash miners managed to stay afloat for a very long time. They have likely accumulated a significant amount of coins at such low prices (current price – $28).

What is happening with ZCash symbolizes the processes that are going on around many of the leading altcoins. The faith of the crypto community was very high, but there is a limit to everything. Bitcoin maximalists can once again celebrate a small victory. A recent hard fork on the Zcash network, which aimed at increasing transaction speeds, brought to the surface the central question: who needs this speed of transactions?