Home › Crypto Review › Hard times for the Bitcoin, last days for the altcoins?

Hard times for the Bitcoin, last days for the altcoins?

The situation on the market of cryptocurrencies looks more and more deplorable. Bitcoin dropped by $600 at night. Market participants expected that bulls would start buying BTC at local lows, but it did not happen. On Thursday morning the first cryptocurrency continues to test support levels, reaching $9,400 and losing 7% during the last day. The decline is aggravated by the growth of trading volumes. In the middle of July, Bitcoin was already declined to the lower limit of $9K, but then it was supported. In case of a breakthrough of $9K, the decline may continue up to $6K, where the 200 MA is situated.

This time the Bitcoin correction is associated with the movement of capital into more stable assets, including bonds and gold. Traditional assets, in any case, will win against Bitcoin in the battle for the demand for safety. It is quite possible that the current Bitcoin price level does not suit large investors. Due to the approaching launch of delivery futures from Bakkt, they would prefer to enter the market at the lowest possible levels. In this context, a large-scale correction would be most appropriate. 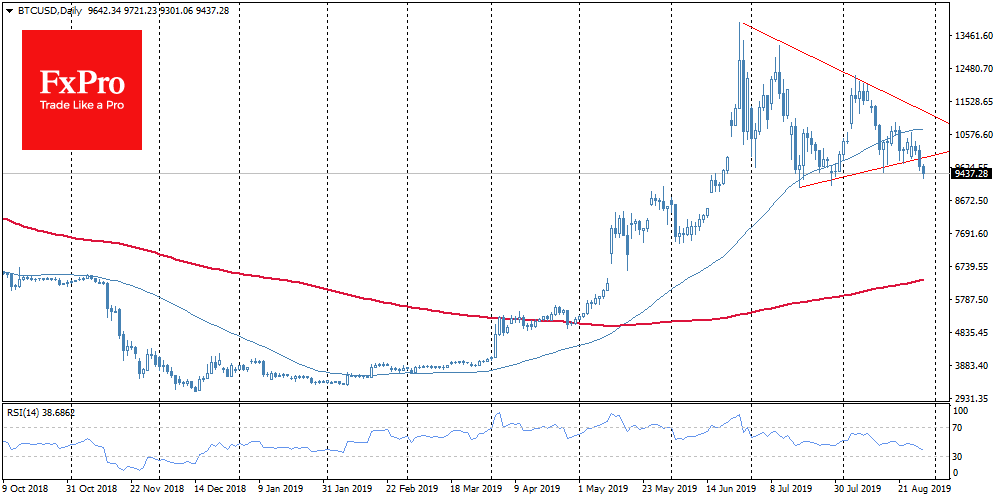 If the Bitcoin shows correction, an altcoin market faces a real bloodbath. The limit of confidence for alternative cryptocurrencies has been exhausted for some time now, while at the stage of correction, altcoins sell even more fiercely. XRP trades at a low of 25 cents. The recently “halved” Litecoin (LTC) loses 10% in the last 24 hours and trades around $65 (-27% per month). The leading altcoin Ethereum (ETH) dropped more than 9% and changes hands for $170 (almost -20% per month). ZCash (ZEC), the most popular miner-coin in 2017, loses more than 10% per day and trades for just $45 (almost -35% per month).

Even against the backdrop of a devastating decline of altcoins, the market still has supporters, hoping for the effect of “too low to fall”. Nevertheless, there will be no supporters as well as any optimism ends after the asset collapsed by more than 90% from the historical highs. Also, many of the “2017 crypto stars” operate on a mining basis. It’s not hard to guess that miners won’t work at a loss forever, as the difficulty remains at a historic high while the price goes down. This gap will inevitably be corrected by the market. 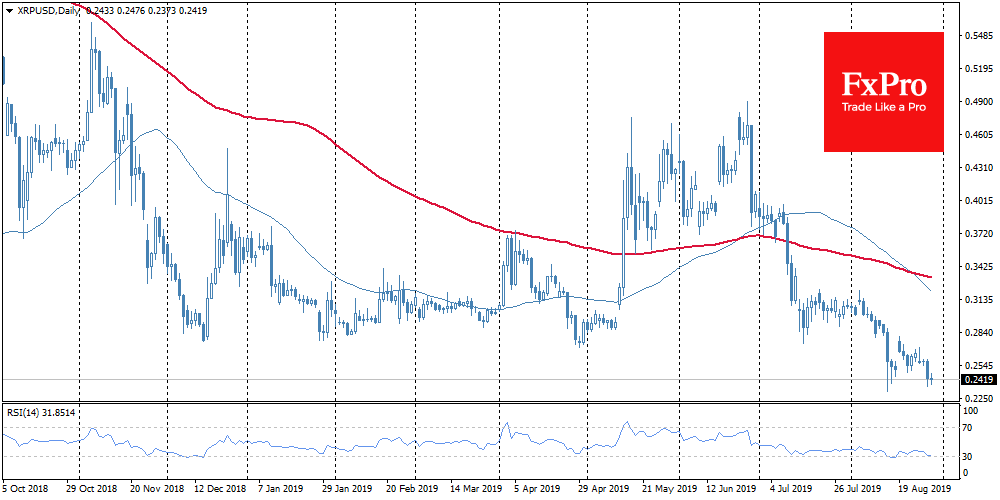 The positive scenario is that the approaching launch of Bakkt may once again support the Bitcoin market, and already now we can see the cautious attempts of the bulls to take control of the market, and the correction has stumbled upon the current level. In the future, much will depend on the position of large institutional investors. In 2017, futures, at least, contributed to the collapse of Bitcoin. Even if the benchmark cryptocurrency will grow, the prospects for altcoins seem incredibly bleak, as they will be mercilessly exchanged for Bitcoin.