Bitcoin’s bounce bumped into the resistance

The end of the week turned out to be much more favourable for the crypto market than its beginning. Bitcoin was able to return from the area below $7,000 and clings to levels around $7,500. In June and October, this area was a significant support that now may become serious resistance. Nevertheless, we are witnessing a decline in trading volumes to $20bn on the way to growth against $45bn at the beginning of the week, which calls into question the short-term outlook for the benchmark cryptocurrency, pointing to the “wait-and-see” approach of investors. 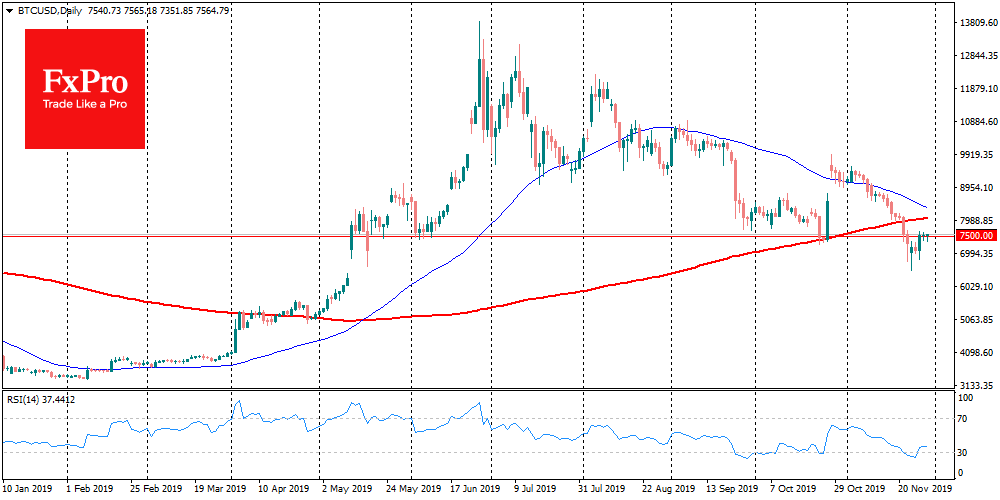 Judging by the record statistics from Bakkt’s platform on Wednesday, institutional investors show much higher determination. It became known that the daily volume of the company reached a maximum of $42.5mln. With the extremely disappointing start, the current events may indicate a gradual increase in demand from institutional investors. Even more positive is the fact that a sharp rise in the volume of Bakkt coincided with the rebound of Bitcoin price from $7K to $7.5K.

Everyone knows that the crypto market is relatively small compared to the traditional sector. Therefore, it is much easier victim for manipulations. The collapse at the beginning of the working week may be since hedge funds on CME have $50 mln in short positions for Bitcoin. Quite enough to strengthen the adverse reaction of the market, already affected by the actions of the Chinese authorities. In addition, the situation with the “miners’ exodus” also helped to form a “perfect storm”.

Some analysts call the current crypto market bounce “dead cat bounce”, treating everything as a bounce in the downstream channel. Some media also expressed an opinion that crypto-winter did not end at all, which caused a fierce reaction of crypto-community, which is not famous for its tolerance to the opposite position and supports only the “growth theory”.

Nevertheless, there is a relatively large camp of experts who still believe that the value of Bitcoin is zero. Regulators effectively stopped off all massive projects based on blockchain or any other monetary surrogate. There is growing confidence that the cryptocurrency will not be allowed to become the mainstream unless it is the “right” state-owned cryptocurrency.

Ceteris Paribus has estimated that the current cost of producing one bitcoin is $7,100. Past average values of around $4,300 named incorrect, as they do not take into account equipment depreciation. A lousy situation for small miners, who may gradually leave the market, strengthening consolidation in the industry.