Bitcoin: the motion is life

Bitcoin has almost entirely offset the growth, which the cryptocurrency managed to achieve at the background of Chinese FOMO. Bitcoin has lost more than 5% in the last 24 hours and trades around $7,500. The decline below the 200-day moving average opens the way to $5K, where the previous consolidation area is located. The crypto community suggests that the fall may be due to the capitulation of the miners, which is considered an extremely bearish signal for the benchmark coin.

It means that miners have to sell their assets to continue working or even have to exit the market. The last time Hash Ribbons indicator was inverted Bitcoin started the process of declining from $6K to $3K. The news from China about a police raid against the Shanghai office of Binance added “oil in the fire”. Crypto exchange representatives deny this fact. However, the Chinese authorities seem to want to express their position on cryptocurrency trading. 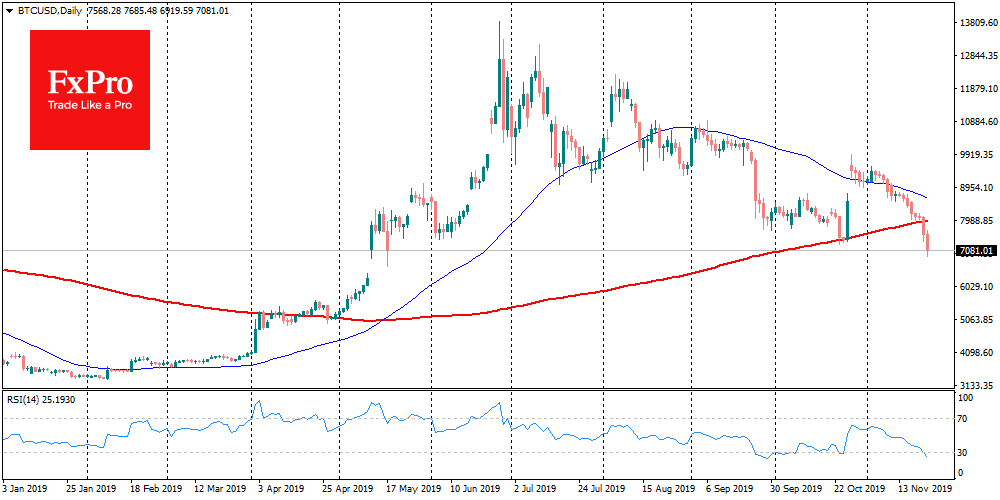 This was bad news. The good news is that at least for a while the sale has stopped. If there are no new selling impulses for some time, buyers may start looking at the asset. It is worth mentioning that the benchmark cryptocurrency is in a tight “institutional ring”. These investors are not interested in the technical prospects of the asset, just in price fluctuations, whose triggers will differ. Still, they will have one thing in common: to make the majority move in one direction while opening the positions in the opposite. So it won’t be boring.

Many forecasts are based on past patterns. This applies mainly to Bitcoin. At this stage of market development, it can be a significant mistake. Waiting for Bitcoin to grow based on halving may be the main mistake now, as the market will play against the event that everyone knows and expects. Besides, halving has only been a few times, and this is very insignificant to make a statistically complete picture. Market participants also remember that historically November was a good month for Bitcoin, but not this time.

All this leads us to one basic idea: past trends do not work because the composition of the crypto market has changed radically. In the past, it used to be an “exclusive club”, now there are institutional investors in the market, we have futures traded, regulators and other investment products closely monitor the situation.