Home › Crypto Review › Bitcoin the first and the only? Facebook’s project will show

Bitcoin the first and the only? Facebook’s project will show

By the end of the workweek, bitcoin and all altcoins are declining. BTC loses more than 7% over the last 24 hours and trades around $10,900, breaking below the round level of $11K. Weekends often become the starting points of the dynamics for the new week, and after the holidays in the US, we can see a surge of activity, and not necessarily that this will be a return to growth.

The depletion of growth impulse, noted on the daily RSI, can play a role in the pressure. The index under 70 can cool speculators who are guided by technical analysis, and there are a lot of them, as we see. The decline in trading volume combined with prices drop improved the picture, that is, Bitcoin drops simply because the bulls have paused for the time being.

While all attention is focused on Bitcoin, it is obvious that the altcoins market does not repeat the dynamics of the past BTC’s rally. Bitcoin dominance index reached 62% and continues to grow. Alternative cryptocurrencies are not in the sphere of interests of large capital since the infrastructure during the “crypto-winter” was created specifically for Bitcoin. Retail investors out of habit buy altcoins after bitcoin spikes, waiting for growth to duplicate. However, more often than not, this growth is very strongly limited. Instead, alternative cryptocurrencies tend to duplicate the declines of Bitcoin. In 2017, the ICO boom, mining boom, the feeling of something completely new and unexplored moved forward the prices of new “Bitcoin killers”, but now it is becoming increasingly clear that these coins with specific features are needed only for a limited number of market participants. 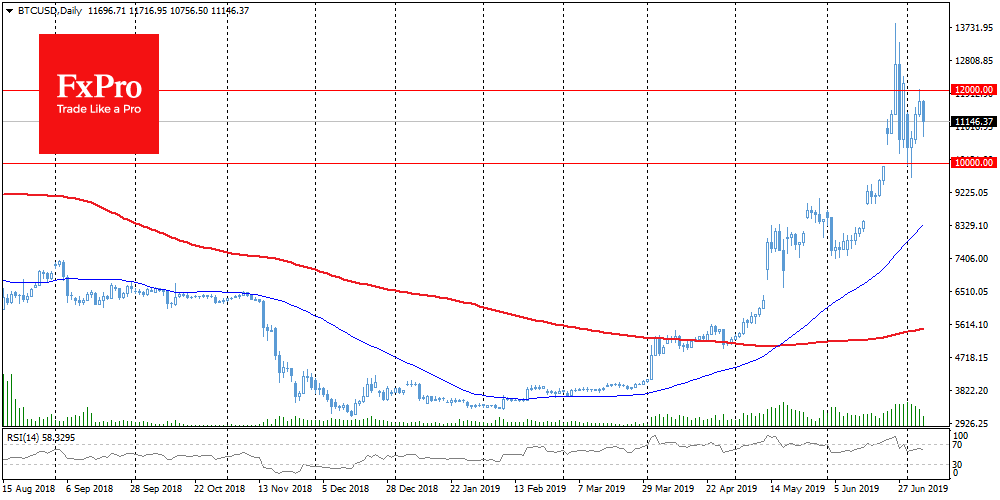 It turns out that the Bitcoin maximalists were right in their adherence to a single reference coin since it is precisely this approach that large capital initially adheres to. This strategy is simpler, and trading history shows that it is much more profitable. At the moment, the rally is really centred on the Bitcoin, and not on the blockchain as a whole. Recently, there have been claims that blockchain technology is the most overvalued “electronic worksheet” in the world.

Even the largest projects, including Ripple, which invest huge amounts of money (about $500 million per year) in various start-ups in order to somehow increase the use of the XRP token, do not show signs of success. That is why the largest central banks did not have any concerns about the “threat of cryptocurrency for the stability of the global financial system.”

Only the likely appearance of Libra from Facebook caused a real resonance among politicians and officials of all levels. US congressmen are sending open letters to Zuckerberg calling for a stop of the Libra development, while Visa and MasterCard, which supported the project, may also have problems. Obviously, Facebook will have to use all its firepower and an army of lawyers to counter this pressure. Nevertheless, it is necessary to understand that any state has zero-tolerance related to fundamentally critical issues. The national currency is the main instrument of any government, and encroachment on its status goes beyond any law.