Bitcoin trades near $10,500, adding almost 6% in the last 24 hours. The active growth phase started on the night of August 1, gaining new momentum in the morning. According to the CMC, since July 31, trading volumes have grown by 21%, which is fundamentally positive for the cryptocurrency, given the upward price trend. The BTC steadily exceeded the 50-day MA, however, it will be possible to say that the bulls took the initiative only after the breakthrough above $11,800, i.e. after the closing of the gap that marked the start of the recent sell-off. Along with the Bitcoin, altcoins also grew, but their dynamics looks much more modest. 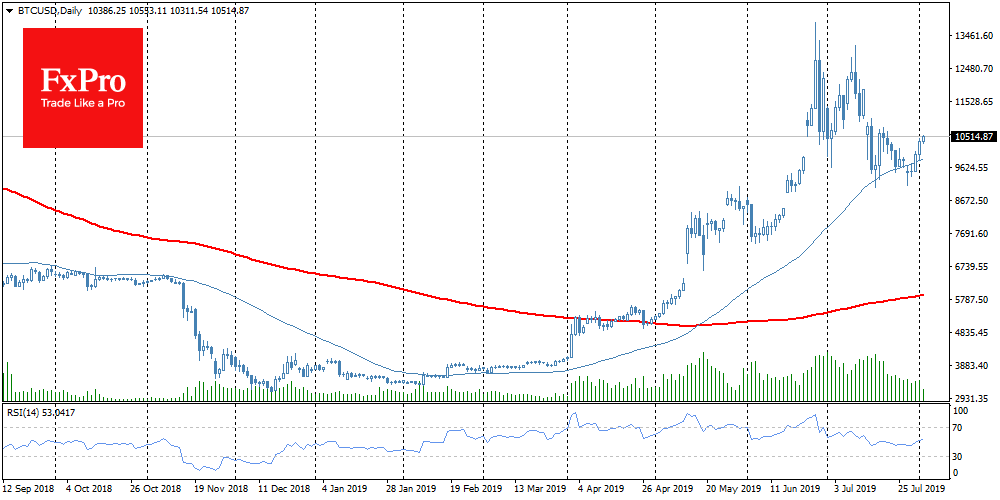 So what are the reasons for the current spike of growth: speculations, Fed rate cut, technical reasons, fundamental events? Most often market participants refer to the decrease in the Fed’s rate and the false LedgerX tweet about the launch of deliverable Bitcoin futures.

These are events from two different worlds, so why is it that the crypto community, which aims to “Satoshi’s vision of a world without banks and intermediaries” so eagerly seeks to tie the dynamics of Bitcoin to processes in the traditional financial sector? In addition to being tired of accusations of Bitcoin “hollowness”, market participants are trying to find any reason to justify the future growth of Bitcoin. In the case of interest rates, investors hope that the released liquidity will be directed towards risky assets, the “king” of which is Bitcoin. There are also opponents who believe that Bitcoin has absolutely nothing to do with events in the traditional financial world, and the only factor influencing the price is speculation.

Crypto market participants have also been waiting for delivery futures for Bitcoin for a very long time. They also speculate on it. Thus, LedgerX for some reason tweeted about the launch of its futures, which was denied by the Commodity Futures Trading Commission (CFTC). Apparently, the desire to be faster than Bakkt is so great that any tricks are used.

All of the above indicates that the main driver of the cryptocurrency is speculation, not fundamental news. While all the attention is focused on Bitcoin, events where digital currencies really work as a convenient means of making payments are disappearing from investors’ sight.

It turned out that USDT is very popular in the calculations between Russia and China. Chinese traders bring $10 to $30 million a day to Moscow over-the-counter trading floors, receiving tokens to their accounts. Returning home, they can easily exchange USDT for fiat, despite government bans. They are dealing with over-the-counter market maker listed on major stock exchanges, receiving a bank transfer or otherwise. Many investors doubt whether the USDT token is secured with real dollars, but who cares if the cryptocurrency is used as a transit currency and it is convenient for all parties?

The market would be very happy to have something like “Bitcoin Stable”. It would draw a line under all projects like Libra or even TON. The benchmark cryptocurrency has everything: recognition, infrastructure and demand. Only one thing missed: price stability for existence as a means of payment.