Bitcoin spiked on Thursday by 9% in just a few minutes. By Friday morning, the BTC adds more than 6% and trades around $10,500. Perhaps, in order to restore the belief of the markets in the bullish trend, the Bitcoin will have to step over the next round level by $11K. Altcoins also showed a sharp rise in quotes, but still did not offset the drop since the beginning of the week.

The most impressive dynamics was demonstrated by Litecoin (LTC) with +25%. Buyers were interested in this altcoin because of the approaching of halving in August, while after the correction of LTC was very underestimated. At the current price level, Litecoin is 97% below its historic high, although since the beginning of the year the coin has gained 226%. Litecoin is experiencing obvious difficulties with growth amid general disappointment in the altcoin market in general. Nevertheless, the market is still relatively easy to manipulate, despite some growth in trading volumes. 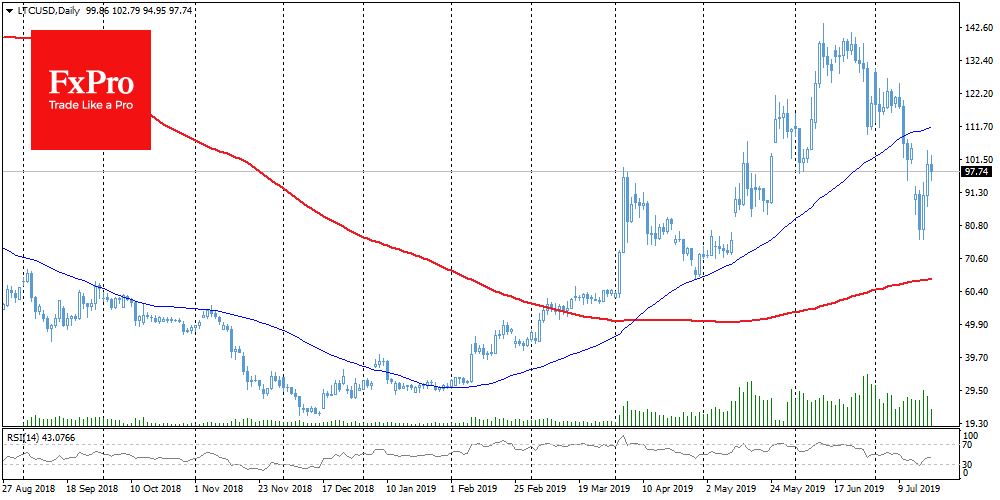 Large-scale correction of the crypto market earlier this week was due to the weak position of David Marcus’ CEO Calibra at the hearings in the U.S. Congress. Officials of all ranks up to the presidents expressed their negative opinion on the cryptocurrency being developed by Facebook. There is a high probability that they will win, limiting the Libra functionality to a minimum, which does not represent a “danger to the stability of the financial system”.

The U.S. House Committee on Financial Services has prepared a bill to ban the issuance of cryptocurrencies by large companies with annual profits of more than $25 billion to make Facebook, Google and others “too big” to release their digital currencies. In case Trump signs the law, the violators will pay a fine of $1 million a day. The paradox is that Facebook’s profit from the full-scale launch of its cryptocurrency may be higher than the fine. However, fundamental factors are already coming into play here: regulators may increase the amount of the fine and limit the company’s activity in general.

The issues of regulation and the attitude of officials towards the crypto sector have become a fundamental factor for the price dynamics of cryptocurrencies this week. However, later it became clear that little had changed for Bitcoin. First of all, the size of the market does not frighten officials. Secondly, it is decentralized and there is simply no one to ask uncomfortable questions. Third, there are suspicions that the U.S. government itself is using digital currencies to finance its unofficial needs abroad. We live in an era in which the demand and security of an asset transferred into a new dimension in the digital sphere. Market participants expected large corporations to take over the market with cryptocurrencies as competitors to governments, but practice so far indicates that maybe a superstructure over national currencies has already been created and politicians are simply shielding the market from other digital currencies? In this case, Bitcoin maximalists may once again be right about their expectations.