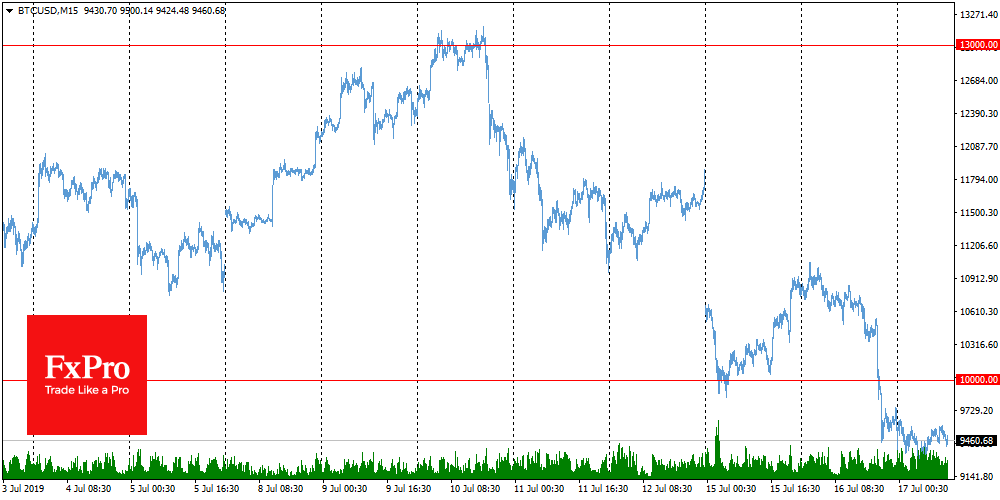 David Markus from Facebook’s Libra sounded unconvincing at the Congress speech, resulting in Bitcoin falling from $10,750 before the event to $9,500 by Wednesday morning. The decline of the cryptocurrency occurred on increased trading volumes, reflecting the desire of market participants to take profit from the previous rally.

Libra CEO’s speech in Congress turned out to be a vivid precedent of the officials’ attitude to the entire crypto sector in the face of Facebook, causing pressure on the entire market. Among other things, officials were concerned about the security of customer data and the reasons for Libra’s registration in Switzerland. Answers to these questions seemed unconvincing to investors. Nevertheless, the Bitcoin dominance index continues to grow, reaching 66.2%. It is obvious that investors’ faith in altcoins is even weaker. If the BTC does not start to attract buyers near the current levels, the sell-off may continue. If in the recent past Bitcoin has swept away resistance levels, now we will talk about support levels.

In the course of the decline, Bitcoin returned below the psychologically important round level of 10,000 and also touched the 50-day moving average, which is currently passing through 9,200. A decline under this mark could boost the sell-off as Bitcoin lately has been following the tech-analysis signals very closely.