Friday morning brings some positive to crypto investors: almost all of the Top-100 coins are in the green zone. The benchmark Bitcoin (BTC) added almost 5% in the last 24 hours and now trades close to $6,700, while XRP, which jumped by 45% to $0.47, became the real crypto-star among the Top-10.

A number of factors helped to form this price dynamics:

• Ripple’s CEO hints about the launch of a new product based on xRapid’s XRP token as early as next month; • access to the biggest Asian cash remittance market including India, Sri-Lanka, Malaysia, Indonesia and Vietnam; • fintech start-up also begins working in Africa. Ripple connects these regions with Europe. Company’s projects are opening the corridor for transferring a significant amount of liquidity. 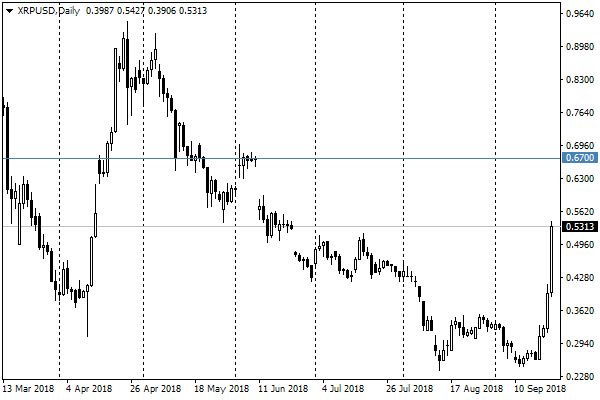 Besides, it is obvious that the community desperately needs some positive news, while XRP’s price allows investing with any budget size. In addition to XRP, a growth of more than 20% showed Stellar (XLM) ($0.24) and Cardano (ADA) ($0.08). The Securities and Exchange Commission (SEC) started to review the VanEck and SolidX application for the Bitcoin ETF, but still there is no guarantees for a positive outcome. In case of approval, it will become a precedent with the massive appearance of the ETF in future.

However, what exactly large institutional investors can give to the market? On the one hand, we can expect billion-dollars investments and final mainstream adapting. On the other hand, large capital can use high volatility to “shake” the market to the levels, which can be unsuitable for retail investors. The future of the cryptocurrencies will then be very much in question as it was after the launch of futures in December 2017.

The December launch of the Bitcoin futures often fully considered as unofficial starting point for a large-scale collapse of the entire crypto-currency market. The recent increase in the complexity of mining also can be explained. At the Coindesk Consensus Singapore 2018 conference, the heads of the largest mining equipment companies made it clear that they were not only going to stay at the market, but also believed that the current bearish cycle was “a great time to strengthen their positions in the market.” It is likely that among ASIC producers and miners the FOMO-Effect (the fear of missing the opportunity) is raging, that is why in the medium term we will see the growth of difficulty.

At the moment, the crypto-currency prices are near the lows, but unleashed by Trump trade war, sanctions, tightening of the monetary policy and uncertainty create a favorable environment for the long-term cryptocurrencies growth, especially in the emerging economies.

As for the technical analysis side, once again the Bitcoin got support on approaching the “bottom” about $6,000. However, in the nearest future the benchmark cryptocurrency will have to face the test of the important resistance level. An important resistance level descended into the region of $7,000, in case of taking it, the cautious bulls should also await the confirmation with crossing the previous peaks at $7,500. Without taking these levels, it will be difficult to talk about a change in the trend.