Home › Crypto Review › A serious challenge for the crypto market

A serious challenge for the crypto market

Judging by the BTC decline below $10’000, many investors lose their nerves. At the moment, BTC is trading at $9’900: thus, we are witnessing 30% correction from a local maximum of around $14’000. So why does it cause such shock panic waves, if we heard about it so long time ago?

Apparently, when Bitcoin time and time again swept away new psychologically important resistance levels and round marks, investors became more and more convinced that now we are in the midst of a super-rally with potential targets at historic highs of $20’000. Nevertheless, in fact, everything happened differently, and the resistance at $14’000 turned out to be too strong for buyers. 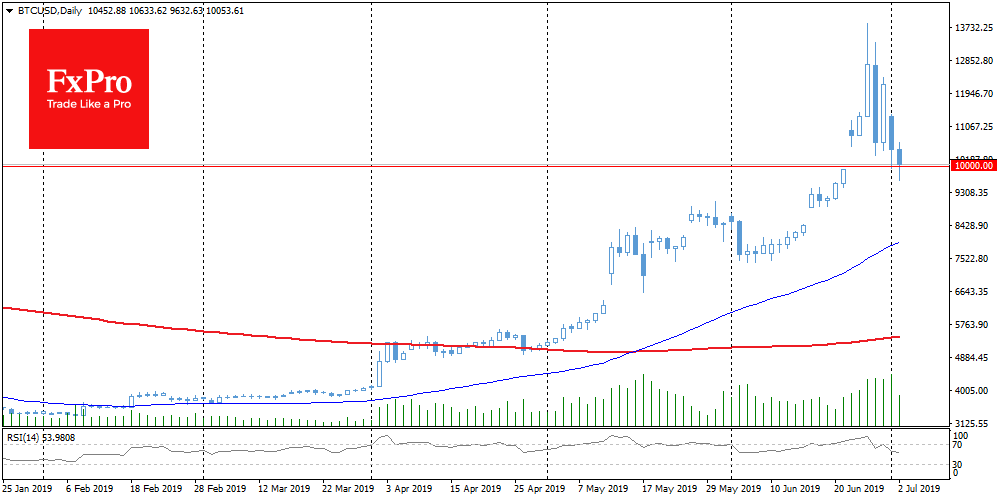 Bears are sure that the maximum has already been passed, and in the future, we will see only new minimums. Trader Alessio Rastani, based on Elliott’s wave theory, believes that Bitcoin can turn “south” and even break through $3’000. Well, that would be great news for whales who have already sold their digital assets at $14’000.

If we look not so globally, we should pay attention to the increased trading volumes that accompany the Bitcoin sale-off in recent days. Trading volumes growth amid declining quotes is a sign of the prevalence of bears in the market. In addition, last week the RSI declined into a region below 70, also signalling a depletion of growth momentum as it is a signal to sell for traders oriented to technical analysis.

Starting from June 30, there was a noticeable increase in activity within the largest 100 BTC wallets. On June 30, a trader opened a short position worth 20’000 BTC on Bitfinex crypto exchange, which presumably can be considered the starting point of a large-scale correction of the entire market. It should be noted that the bears in their forecasts also refer to the origin of the current rally. It is believed that the current rally has institutional roots, whereas last time the closure of positions by large capital provoked “crypto-winter”.

Various forecasts begin to dominate the market depending on the current direction of price dynamics. Nevertheless, it should be noted that Bitcoin may still have room for growth since retail interest began to grow up actively only a month ago. Given the general economic and geopolitical instability in the world, the lack of high-yielding assets within the traditional market, as well as the soft rhetoric of central banks, the cryptocurrency market can still get its impetus, while consolidation at around $10,000 – $11’000 would be an excellent scenario for the market. Inability to return above $10’000 can result in an even bigger sale-off.