Crypto market remains in a sideways trend: Bitcoin traded around $10K on Friday morning, altcoins are still near the lows, BTC dominance index grew above 70%. Autumn promises to be productive on events with the deliverable futures launch from Bakkt, further rejection of the Libra project by world officials, and the TON launch. This news may have an impact on the price dynamics of cryptocurrencies.

The altcoins historical lows make us think about the prospects of survival of the alternative cryptocurrencies separately. After all, if the cryptocurrency market will develop according to the logical scenario of the stock market, then soon altcoins may start to unite according to their specific conditions. That is, we can talk about the appearance of some crypto-indexes by analogy with S&P500 and Nasdaq.

The ability to “construct” a crypto product for your particular needs by combining the properties of several altcoins in a single transaction would be a revolutionary tool. However, cross-blockchain products are unlikely to be of developers interest. Every project in the initial phase of the crypto market development tried to be unique, to solve unsolved problems of other developers.

Even considering the low price (the ETH/BTC pair has fallen by almost 50% since the beginning of the year), Ethereum (ETH) still attracts sellers. The launch of the zero transition phase of the Ethereum 2.0 project is expected to happen in January 2020 but unlikely to change ETH’s fate. The Ethereum founder Vitalik Buterin concerned about these global changes, but everyone recognizes that ETH needs to switch to PoS.

The high-profile announcement of the launch of the “limited Bitcoin-ETF” by VanEck and SolidX, attracted only 4 BTCs to the product as it has not yet received regulatory approval for a full-fledged ETF. 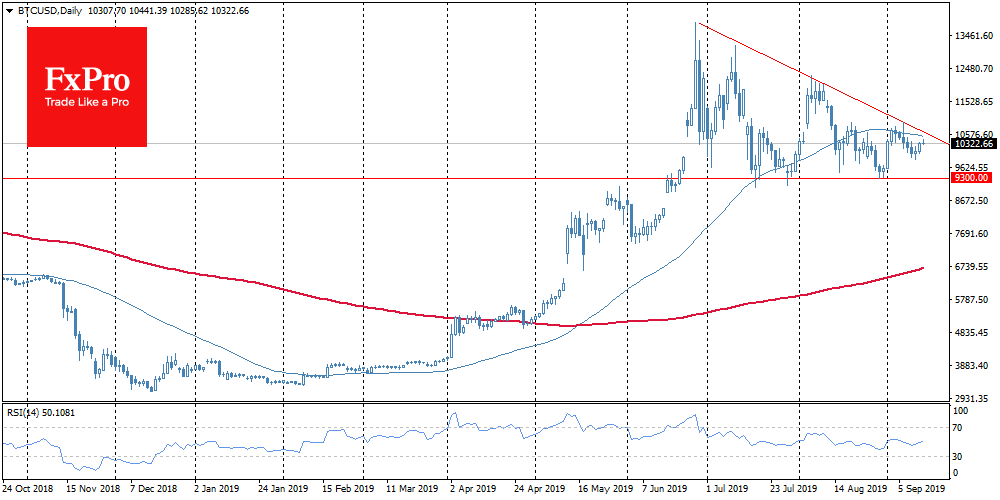 Institutional investors’ money is of interest to all participants of the crypto market, but what if expectations are too high? If the BTC is overly “optimistic”, the following correction unlikely will be stopped at the recent lows near $9,300.

On the chart, BTCUSD continues to form a triangle with support at $9,300 and decreasing resistance which reflects the increasing pressure of sellers. Besides, the price remains below the 50-day average, which is historically a negative signal, also indicating the prevalence of sales. Over the last four weeks, Bitcoin has been reversing down, failed to climb above the MA50 (now at $10,500).