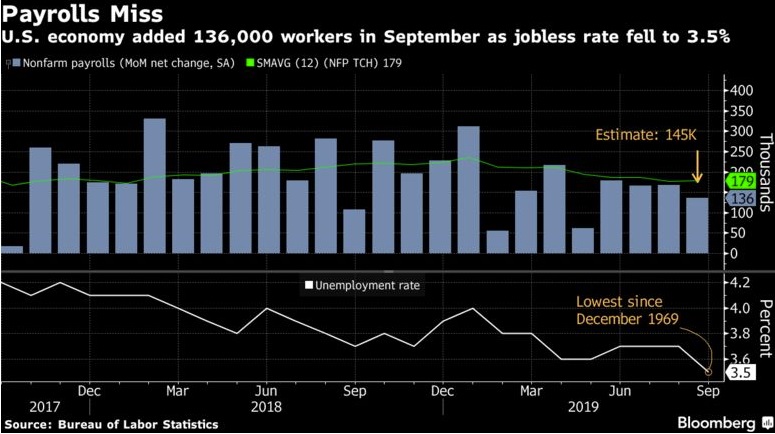 U.S. hiring missed projections in September and wage gains cooled, offering a warning that the record-long expansion is poised for further slowing even as the jobless rate fell to a half-century low. Private payrolls expanded by 114,000 after an upwardly revised 122,000 advance the prior month, according to a Labor Department report Friday that missed the median estimate of economists for a 130,000 gain. Total nonfarm payrolls climbed a below-forecast 136,000, which was boosted by 1,000 temporary government workers to prepare for the 2020 Census count.

Average hourly earnings rose 2.9% from a year earlier, the weakest in more than a year and missing estimates. The jobless rate unexpectedly dropped to 3.5% from 3.7%, for the lowest since December 1969.  Even with the unexpectedly shaky jobs and wage figures, traders of fed funds futures slightly reduced the amount of easing they expect from the U.S. central bank this year and marginally trimmed their expectations for an October cut amid a lower-than-expected unemployment rate. U.S. stock futures rose and Treasuries fell.

More broadly, the downbeat reading adds to signs President Donald Trump’s trade policy and weakness abroad pose an increasing threat to growth in the world’s largest economy. At the same time, the unemployment rate decline gave him a chance to boast, which he promptly did on Twitter minutes after the report. The jobs report caps a week of U.S. economic data that whipsawed stocks and sent already-low Treasury yields tumbling, led by a key manufacturing gauge that sank deeper into contraction with the worst reading in a decade. A slowdown also threatens Trump’s re-election prospects next year, with the president frequently staking his message on a strong economy.