Home › Market Overview › The trade war already cost China $2 trillion, and in 2019 things will only get worse

The trade war already cost China $2 trillion, and in 2019 things will only get worse 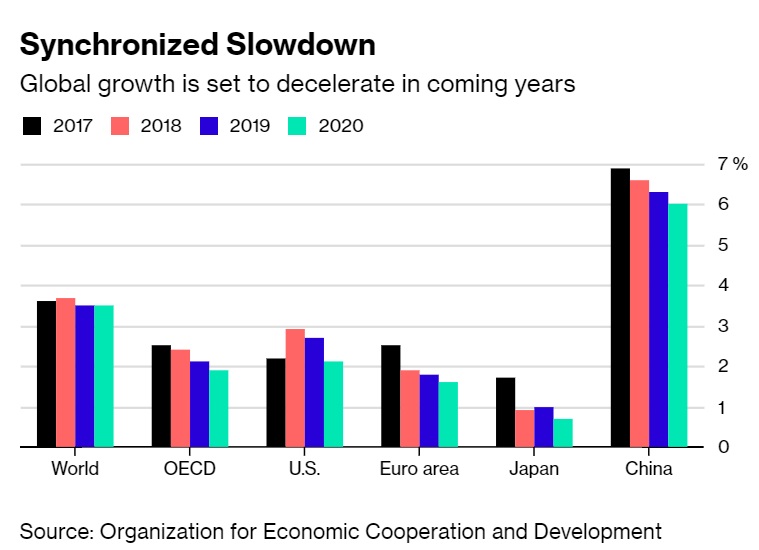 While 2018 was the year trade wars broke out, 2019 will be the year the global economy feels the pain. Bloomberg’s Global Trade Tracker is softening amid a fading rush to front-load export orders ahead of threatened tariffs. And volumes are tipped to slow further even as the U.S. and China seek to resolve their trade spat, with companies warning of ongoing disruption.

Already there are casualties. GoPro Inc. will move most of its U.S.-bound camera production out of China by next summer, becoming one of the first brand-name electronics makers to take such action, while FedEx Corp. recently slashed its profit forecast and pared international air-freight capacity.

FxPro analyst said that financial markets have already taken a hit. Bank of America Merrill Lynch estimates that the trade war news has accounted for a net drop of 6 percent in the S&P 500 this year. China’s stock market has lost $2 trillion in value in 2018 and is languishing in a bear market. Recent data underscore concerns that trade will be a drag on American growth next year. U.S. consumers are feeling the least optimistic about the future economy in a year, while small business optimism about economic improvement fell to a two-year low and companies expect smaller profit gains in 2019. The International Monetary Fund forecasts trade volumes will slow to 4 percent in 2019 from 4.2 percent this year and 5.2 percent in 2017. They warn that trade barriers have become more pronounced.