US stock exchanges continue to make new highs, pulling up the indices of European and Asian exchanges. Markets want a positive end of the year, waving away some unpleasant signals over and over again. Thus, the Shanghai index reached a peak value of one and a half years, while the Stoxx Europe 600 sets historical highs.

At the same time, investors still do not understand what is included in the “Phase 1” of the trade agreement between China and the United States. Weak data on the European PMI, as well as relatively inexpressive statistics from the US, did not prevent the growth of quotations. Although the data remained virtually in the “green zone”, it stalled against expectations. For example, although Markit’s manufacturing PMI got out of the pit, where it was from May to August, still the December value was worse than expected and the previous indicator. Overall, this is a worrying sign that the US economy may be slowing down again at a time when the Fed has stopped monetary policy softening.

Britain and the Eurozone disappointed with their PMIs, experienced a sharp decline instead of the expected improvement. However, this did not stop the stock indices from rising, which are experiencing a real rally, climbing more than 3% since last Thursday, including FTSE100 and Stoxx 50.

It should be noted that such indicators act as a leading indicator of business cycles, and therefore market players usually pay such close attention to them, but not now.

Such concentration of markets on the positive can be justified not only by the proximity of the Christmas period but also by the desire to see things through pink glasses. Lousy news is perceived as echoes of the past, while the future seems with perspective of easing of China-US trade rhetoric, and previous monetary easing, which has not yet fully seeped into the economy. The tariff cuts for Chinese goods (whatever they may be) are much better than the sharp increase planned for December 15. 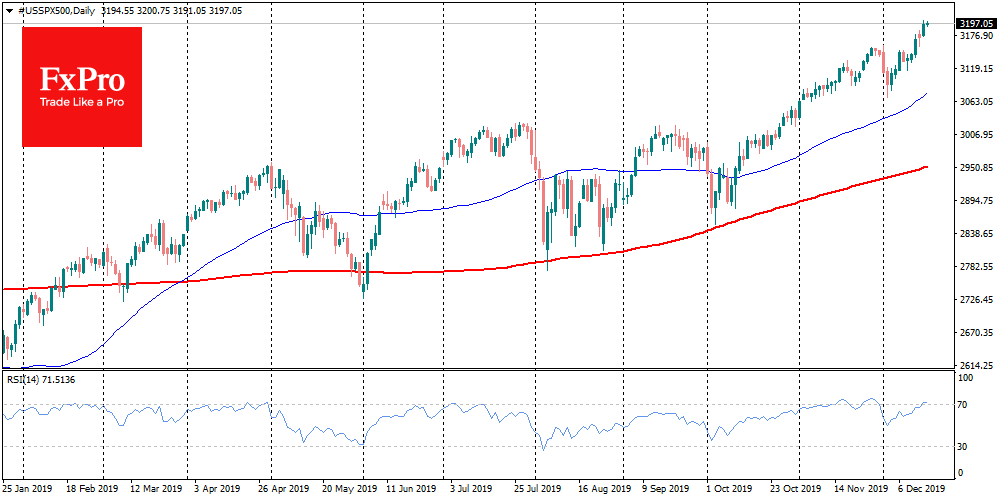 It would not be surprising if the Santa Claus rally will continue in the coming days and the markets will continue to shake off the bad news, celebrating the good news. As for Forex, this may create conditions for further weakening of the dollar and yen, supporting the euro and commodity currencies, such as the Australian dollar.