Home › Market Overview › The dollar’s ascending to the top

The dollar’s ascending to the top

At the weekend, China and the United States introduced reciprocal tariffs, as promised earlier, marking a new phase of trade wars. At the same time, Trump once again encouraged U.S. companies to look for an alternative to Chinese suppliers. Such comments suppress expectations of a trade deal, despite assurances from the parties of progress in negotiations. In fact, the financial markets are developing a trend of dollar strengthening and a weakening of the Chinese yuan, which was formed last spring at the beginning of trade disputes. 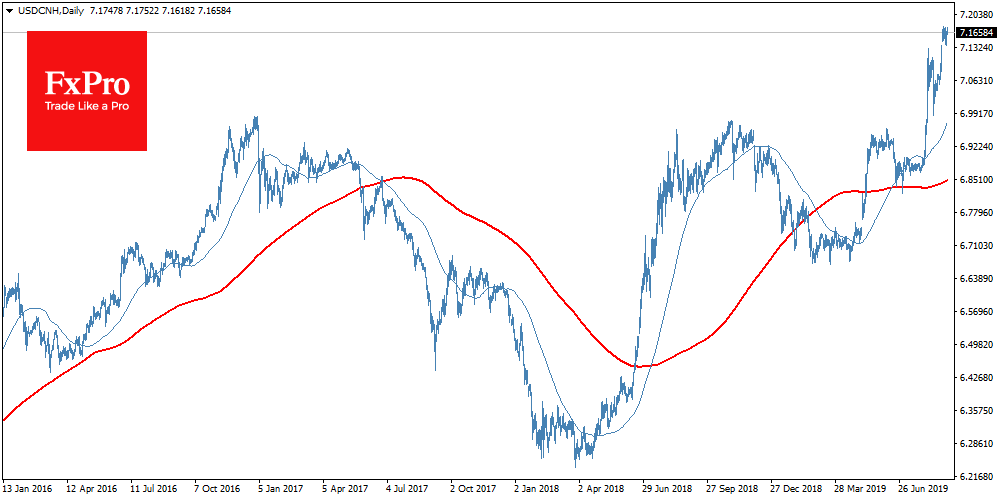 On Monday morning, the RMB started the session near a record low of 7.1780, losing more than 15% of its peak levels in March 2018. While the People’s Bank of China is holding back the decline in the official exchange rate – so not to cause panic in the financial markets – it is in no hurry to fight the market. This containment policy received informal approval from the IMF, which last week noted that it saw no signs of exchange rate manipulation in the Chinese authorities’ actions. This is a kind of carte blanche for the PBoC to act in a similar way in the future.

The dollar, on the contrary, is growing against most competitors, as American investors are returning capital to the country in an attempt to survive times of increased uncertainty. As a result, the dollar index rose to the basket of major currencies to its highest level since May 2017, registering the sharpest weekly increase over the past 16 months. EURUSD, in turn, crossed an important psychological threshold – the level of 1.10. The decline under the lows of August caused an increased triggering of stop-orders, which strengthened the drop of the euro against the dollar, pushing it to 1.0960 at the Friday close. On Monday morning there was a slight strengthening of euro purchases against the dollar, suggesting that the main battle for 1.10 remains. This is because a number of important economic reports are scheduled to come out of America, Europe and other countries this week.

Weak data from the U.S. may hold back the strengthening of the U.S. currency and potentially trigger a pullback of the dollar after the growth momentum at the end of the month. However, the strength of the upward trend of the dollar index should be carefully monitored in the longer term. With the return of market participants from the summer holidays, the current trend of strengthening the U.S. currency may get an even stronger impulse, especially if it receives additional support in the form of tightening trade rhetoric, amid increasing concerns about global growth rates.