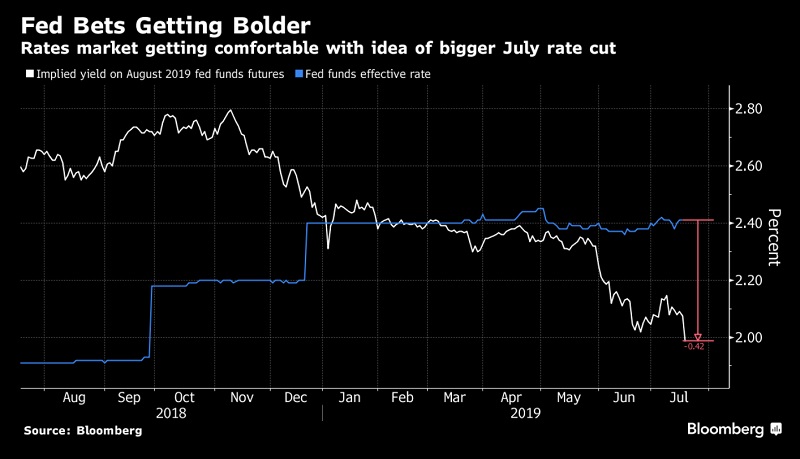 Stocks in Europe and Asia climbed alongside U.S. futures on investor optimism about a more aggressive policy move by the Federal Reserve. The dollar rose. The Stoxx Europe 600 advanced, led by food and beverage companies, while benchmarks in Japan, China and Hong Kong also climbed. Bets mounted for a 50 basis-point cut after two senior Fed officials spoke of the need to get ahead of an economic slowdown when interest rates are already low. U.S. equity futures rose at the end of a big week for earnings, with reports from companies including BlackRock, American Express and Schlumberger due later Friday.

Markets were buoyed by dovish remarks from Fed Vice Chairman Richard Clarida and New York Fed chief John Williams that reinforced bets the central bank could cut interest rates by as much as half a percentage point later this month. Treasury yields came off their lows after the New York Fed tried to walk back Williams’ comments. Investors are also looking to next week when the ECB could shed light on plans to ease monetary policy. The pound and the euro weakened. Elsewhere, oil rose to $56 a barrel in New York, trimming a weekly decline. Gold fell and silver gained for a sixth straight day.