Home › Market Overview › Pound after Brexit: where to go

Pound after Brexit: where to go

British Prime Minister Boris Johnson and European Union leaders agreed a new deal for Britain to exit the bloc. The possible deal news was the main contributor behind the strengthening of the British Pound against the dollar by more than 6% over the week close to 1.30 levels at the peak of growth on Thursday. The agreement between Britain and the EU does not guarantee that Brexit occurrence on October 31. So there are still some level of uncertainty around the British currency.

The deal is yet to be approved by the British Parliament on Saturday.

The agreement in its current form has more supporters than the options agreed by the EU and Theresa May in the past. However, the Northern Ireland’s DUP remains dissatisfied with the current version, promising to vote against it. DUP support is considered critical to go ahead with the Brexit on a legislative level. Boris Johnson’s conservative party does not have a majority in Parliament; therefore, it needs the support of other parties. 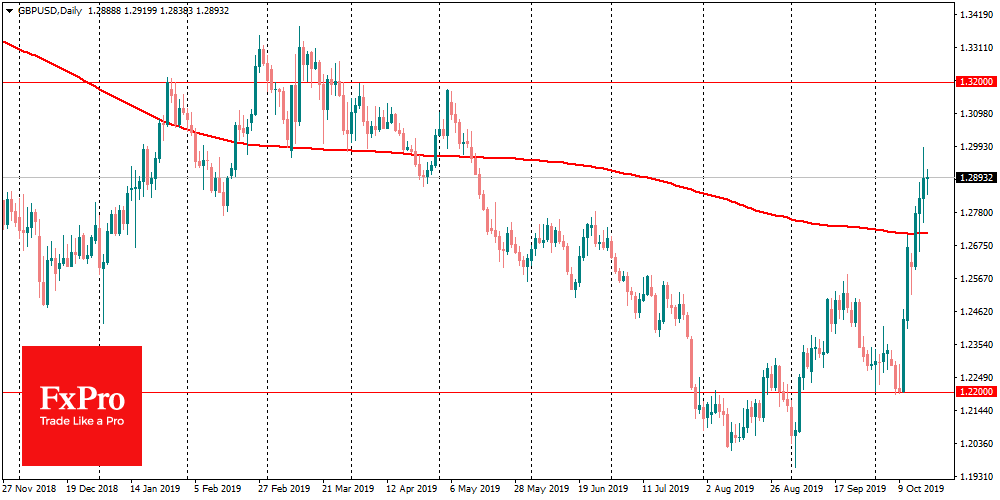 As the FxPro Analyst Team said, it is also important to note that the whole Brexit story is full of surprises and shocks. As in the case of the referendum, the optimism of the market may turn out to be premature. Yet one cannot rule out the possibility of a new voting failure and another delay. A jump in uncertainty can play a trick on the British Pound and quickly wiped out all its gains over the past week from 1.2200 to 1.2840 now. The initial reaction of the foreign exchange market can be enhanced by reduced liquidity during the Asian session on Monday morning.

The approval of the Parliament has the potential to help Sterling to develop its rally, finally removing the risks of the chaotic Brexit from the agenda. In this case, GBPUSD has the opportunity to gain a foothold in1.3200 area – this year highs, where it rose during the periods of enthusiasm regarding the Brexit. An important factor in favour of purchases may be the closing of many short positions in the British currency, built in anticipation of a no-deal Brexit.

But “what will happen next” question is more and more of the minds of analysts. And the answer to it unlikely seem positive now. Most likely, the Bank of England will have to cut interest rates to support an economy facing shocks in demand. The Bank of England can then act like the ECB and the Fed, which are taking active steps to ease their monetary policy.

Besides, observers are inclined to believe that without the EU, the British economy could lose part of its growth potential. Lower growth potential risks turning into a long-term factor of pressure on the British currency, as it will make the policy of the Bank of England softer than earlier. The British Prime Minister vigorously deny this point of view. But as the markets agree with this, it may swiftly return pressure on the Pound after the initial positive reaction. Potentially, this factor may keep GBPUSD from growing, leaving it at 1.32 until the end of the year.