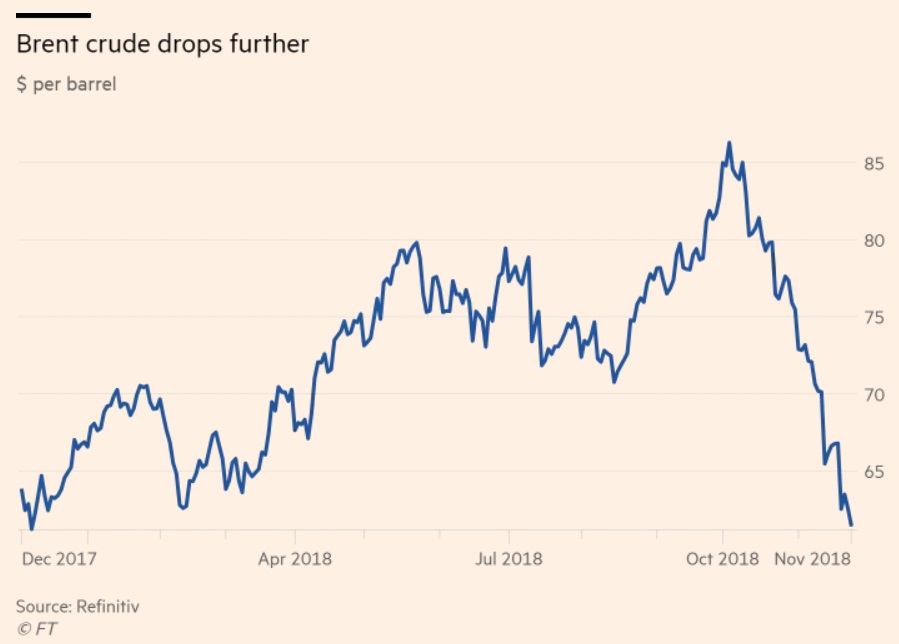 Oil prices declined for the second day in a row on Friday, hitting their lowest level in almost one year on the back of concerns over an increase in global supply and a slowdown in economic growth. Brent, the international benchmark, was down as much as 1.7 per cent at $61.52 in early morning trading in London, the lowest level since early December 2017. That’s a fall of 30 per cent from its October peak of $86.74 per barrel. West Texas Intermediate, the US marker, was 1.9 per cent weaker at $52.84.

Crude’s decline left oil stocks underperforming equities benchmarks in Europe, with the Stoxx index tracking the sector down 0.3 per cent, while the wider Stoxx 600 index was flat. There were bigger moves for China’s oil majors, with concern about slowing growth and the potential economic impact of the trade dispute with the US adding to pressure. Cnooc fell 1.6 per cent and PetroChina was down 0.9 per cent. This week data from the US Energy Information Administration showed US crude inventories had gone up 4.9m barrels from the previous week to 446.9m barrels, the highest level since December 2017.

But according to Eddy Loh, an investment strategist at Credit Suisse, a rebound is on the way: for one thing, there is talk of Opec announcing a production cut at its upcoming December 6 meeting. Developments in Iran could also have significant near-term implications for the price. The Trump administration recently exempted a number of countries from US sanctions on importing Iranian oil, allowing the country’s biggest customers to continue buying its crude for another six months.