Newsflash: Bitcoin Surges to $7,500 on Bitfinex Due to Tether Implosion, Real Price $6,700 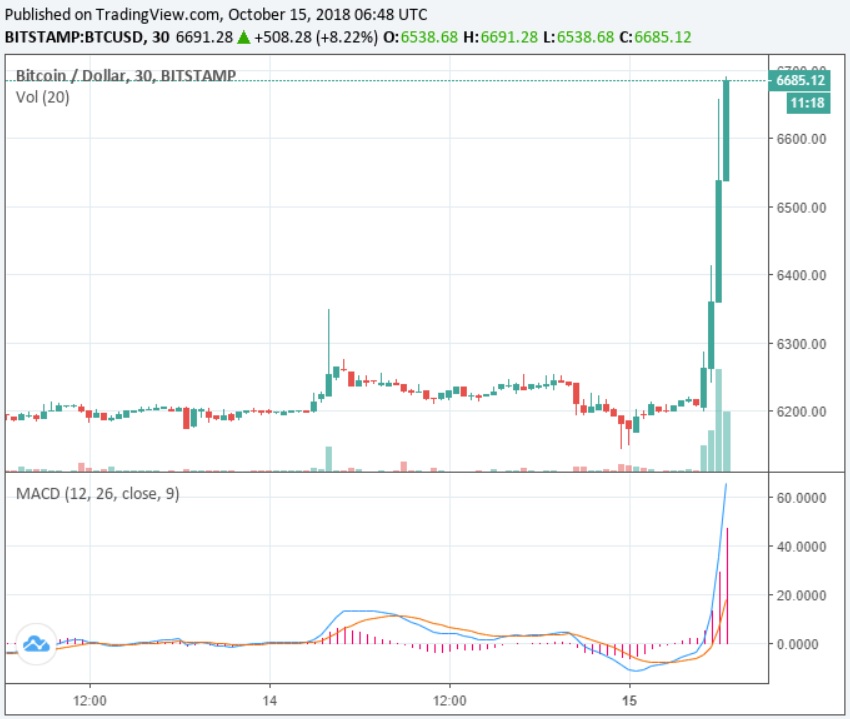 The price of Bitcoin has surged from $6,300 to $7,500 on Bitfinex, a major cryptocurrency exchange that reportedly operates Tether LLC, a firm that oversees the development of stablecoin Tether (USDT). Bitcoin is being traded with a significant premium on exchanges that have integrated USDT such as OKEx and Huobi, because traders have initiated the biggest sell-off of USDT to date. The sudden dump of USDT led the price of the stablecoin to drop to $0.94, by around 6 percent from its peg at $1. The drop in the value of USDT formed a premium on Tether-integrated cryptocurrency exchanges.

Still, on major fiat-to-crypto exchanges, the price of BTC surpassed the $6,700 mark, eyeing a breakout above $6,800, a resistance level which billionaire investor Mike Novogratz has observed since early August. Given the premium on TrueUSD (TUSD), a regulated, audited, and Ethereum-based stablecoin against Tether, it is evident that traders are selling massive amounts of USDT to purchase cryptocurrencies like Bitcoin and Ethereum, and invest in other stablecoins such as TUSD, Gemini Dollar (GUSD), and PAX. On Coinbase, Bitstamp, and Kraken, the price of Bitcoin against the US dollar is at around $6,700, up by more than $400 in the past 24 hours. It is possible that the unexpected decline in the price of Tether had an impact on fiat-to-crypto exchanges.

But, many analysts in the cryptocurrency market believe that algorithms in Asia have started to inject large amounts of cash into major cryptocurrencies, and the drop in the price of Tether is merely a coincidence. At this point, whether the rise in the price of Bitcoin was initiated by the sell-off of Tether or an influx of capital from Asia is of less significance. Over the past 12 hours, the volume of Bitcoin has increased from $3 billion to $4.8 billion, escaping its yearly low mark. If BTC can surpass the $6,800 resistance level in the short-term, it will be possible for the crypto market to initiate a long-waited rally to the upside. However, if BTC fails to breakout of a major resistance level, then there exists a possibility that the dominant cryptocurrency struggles to maintain momentum and falls back to the $6,000 support level.