FxPro: Markets in decline as investors concerned about growth prospects

The weak data from China is putting pressure on the world markets since Friday morning, but it is worth mentioning that even before that, on Thursday evening, the American markets has turned downward, reflecting investors uncertainty in economic prospects.

Recent data from China noted the lowest growth rate of retail sales since 2003. Industrial production slowed down to a minimum rate from February 2016. After these data releases it is difficult to say that there is a smooth and successful transition from export orientation to domestic consumption. 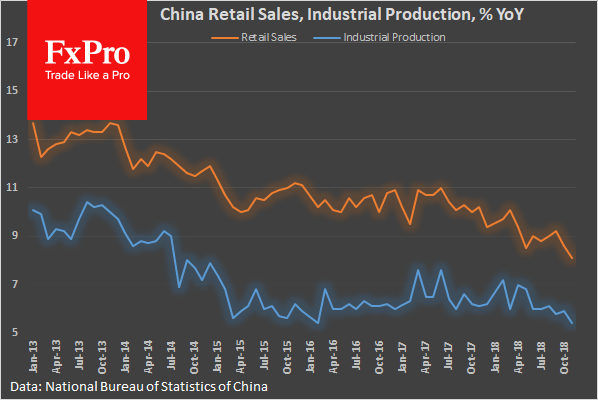 Together with such a strong slowdown in the economy, the expected stimulus can only bring the economy back to its former trajectory, but it is unlikely to boost growth. The Chinese economy is closely integrated into the global economy, and its slowdown is an important factor that pressures global markets.

Keeping pressure on American exchanges seems equally important. We have repeatedly talked that stocks experienced increased pressure in the second half of American session. Very often it is a sign of sale-off by retail investors. It turns out that people are not sure about the future growth prospects of the market.

Economists are agreeing with them as well. Recent polls show that market analysts are anxiously looking at the inversion of the US bond yield curve, raising forecasts of a possible recession next year.

As a result, the Futures Index on S&P500 loses 0.8% Friday morning and returns to levels at the start of the week which are representing the area of year’s lows. Shanghai index A50 lost almost all the previous day’s growth. The dollar is again in demand as a safe-haven currency. The dollar index has returned above 97.0, getting support on the local dips.