The upcoming events this week are a cause for concern for the markets. The first meeting of Chinese and U.S. representatives at ministerial level in months set to take place on October 10-11. On October 15, the Trump administration has planned a new tariff increase from 25% to 30% for up to $250 billion goods, unless there is significant progress on the deal.

Market observers were too often disappointed with their expectations, and this time they have no hope of getting a final agreement. So it has a visible impact on the course of trading in the markets. U.S. stock indices remain close to historical highs, fed by the growth of technology companies’ stock prices. Behind these purchases are expectations of the Federal Reserve would cut its rates further, that allow companies to increase revenue and profit, despite the overall slowdown. On Tuesday morning, Asian indices are also mostly growing on the background of news from Samsung, whose profit forecast exceeded average expectations.

At the same time, the lull prevails in the currency markets, which can be considered alarming. EURUSD encountered strong resistance when trying to grow above 1.10. This currency pair correlates quite strongly with the overall demand for risky assets. It held impressive growth in 2017, adding 16% in just nine months as the world enjoyed a synchronized acceleration of global growth. Conversely, the pressure on EURUSD increased against the background of trading disputes. The pair slipped below 1.10 last week from near 1.23 levels and remained at the lower bound of the downside trading range. 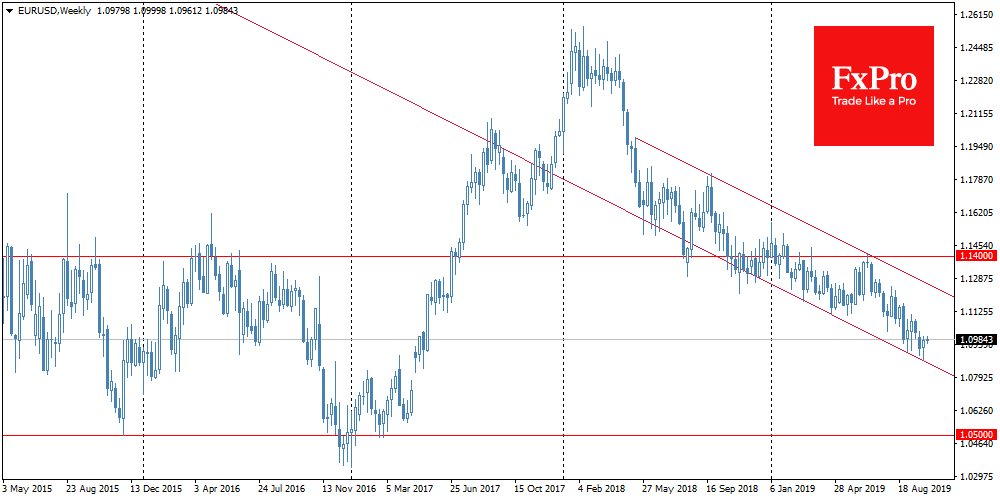 Further postponement of the final agreement between China and the U.S. is now the most likely option. However, in this case, the negative traction of the financial markets may increase. The single currency in these conditions may be under increased pressure, as well as the EM currencies. After all, the most actual question is whether politicians will be able to resist the global cooling of business activity. In this case, EURUSD has a potential opportunity to return to the 1.05-1.03 area by the end of the year, where the pair found support since 2015.

Alternatively, hopes for lower tariffs and a turnaround of world trade to growth may strengthen, if the markets stay encouraged by the progress of negotiations. In this situation, the euro may well enjoy growth to dollar. EURUSD may well be able not only to return to the upper boundary of the downside channel above 1.12 in the next couple of weeks but also to test the level of 1.14 – the previous high in mid-June till the year-end. Such a reversal will be possible by restoring hopes for a stronger economy and inflation, which will allow the ECB to put less pressure on the monetary easing pedal.