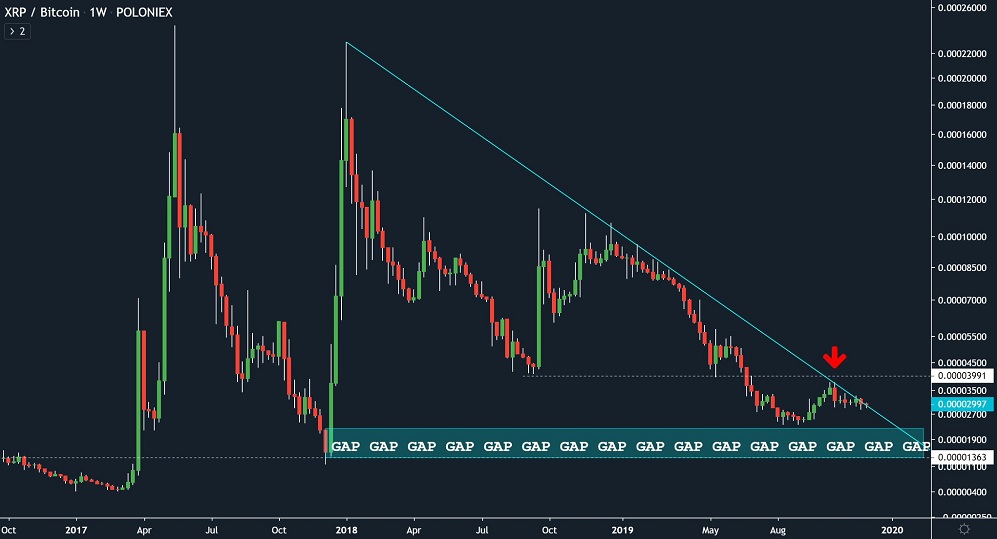 Although many major altcoins saw some relief in the first half of 2019, XRP remained stuck within the lower-$0.30 region, and the recent downturn in the aggregated crypto market that occurred in early-November led XRP to plummet to fresh 2019 lows of just under $0.20. In spite of this bearishness, it is important to note that Ripple’s transaction volume has been on the rise as of late, but this may not be enough to help propel XRP’s price higher in the near-term.

At the time of writing, XRP is trading down nearly 2% at its current price of $0.228, which marks a slight retrace from its daily highs of over $0.23. Over the past week, XRP has been finding strong buying pressure within the lower-$0.21 region, signaling that this is a level of support for the cryptocurrency. Just below this price level, at roughly $0.20, is another strong region of support that was confirmed in late-November concurrently with Bitcoin’s drop – and subsequent bounce – from lows of $6,500.

Teddy, a popular cryptocurrency analyst on Twitter, spoke about this in a recent tweet, saying: “#RIPPLE | $XRP: It has been 8 weeks that price has been testing a resistance imposed 700+ days ago. Any updates? nah, still weak as hell – regardless of you, your mother and neighbor shilling it. Statistically speaking, it’s more like to go to zero than $589.” Assuming that the fundamental strength of XRP – which is emblematic of its transaction volume, use cases, and trading volume – grows as 2019 nears an end, the embattled cryptocurrency may be able to gain some strength as the new year kicks off.