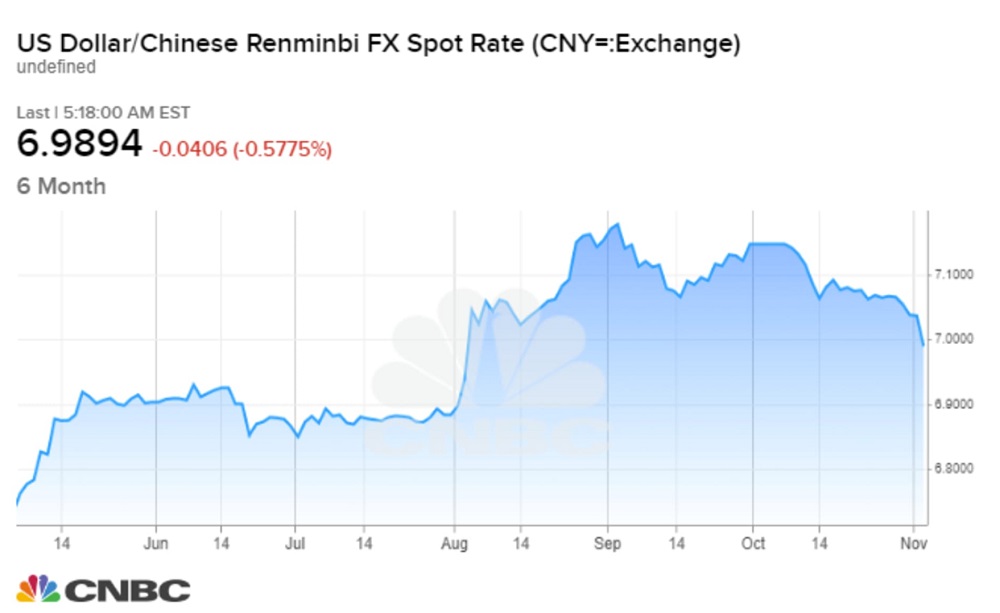 The Chinese yuan soared past 7 per U.S. dollar on Tuesday, climbing to a fresh three-month high as investors became increasingly hopeful about the chances of a possible trade deal between the world’s two largest economies. The currency jumped above the key benchmark and reached its highest level since August 5, trading at $6.9912 according to Reuters data.

The psychologically important 7 per U.S. dollar level had been a key support for years until early August — when the country’s central bank allowed the yuan to weaken past 7 for the first time in more than 11 years. Shortly thereafter, the U.S. Treasury Department formally designated China as a currency manipulator. It was the first time the White House had done so since President Bill Clinton’s administration in 1994.

The latest move for the yuan comes at a time when China is thought to be pushing for the U.S. to remove more tariffs imposed in September as part of a so-called “phase one” trade deal, Reuters reported on Monday, citing people familiar with the matter. Market participants expect the two economic giants to sign a limited trade agreement later this month after both Washington and Beijing spoke of progress in talks late last week. President Donald Trump had said on Friday that trade negotiations were going well and he hoped to sign a deal with Chinese President Xi Xinping at a U.S. location when work on the deal was completed. The U.S. and China have imposed tariffs on billions of dollars’ worth of one another’s goods since the start of 2018, battering financial markets and souring business and consumer sentiment. The People’s Bank of China (PBOC) had cut the interest rate on its one-year medium-term lending facility loans earlier in the session. It marked the first time the PBOC had lowered this lending rate since 2016.